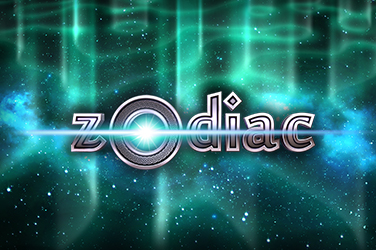 The Zodiac slot game is a good-looking, interesting way to brush up on your knowledge of the heavens. Millions rely on signs every day and now it can be yours too – courtesy of Booongo’s latest release!

Will the stars align for you, or are your fortunes waning? Take a look at our Zodiac slot review!

Zodiac is a game that has an interesting and mystical feel to it. The symbols of the 12 zodiac signs are represented simply by these same twelve signs, with each sign being worth 1.4x your stake for three or 70 times your stake for five when you land them in this slot.

The sound of this game is crisp and clear, with a professional but not overly robotic tone. The graphics are unique to the theme which makes them more interesting than generic symbols that you see in most other games. It’s unfortunate that there aren’t any high-value symbols because those would be desirable for their potential payout; however, even though they’re hard to find it isn’t difficult at all to win some decent payouts without them!

The cosmos as your background, a fearsome sorceress with glowing eyes and flowing white hair to the left. The game itself takes place on five reels and three rows boasting 243 ways to win at generous betting levels of 3p up to £/€/$75 per spin. As such, you’re looking at an impressive 96.45%.

A bonus round in Zodiac revolves around the Wheel of Fortune, which also happens to be a scatter. The wheel has 12 symbols representing each element on it and sends you into one of four different mini games when three are landed anywhere on your reels.

The wheel of fortune will spin, and if you’re lucky enough to have it land on the symbol you picked then congratulations! You’re granted 16 free spins with a 4x multiplier. The good news doesn’t stop there though; even if your luck isn’t as great and the wheel lands on another slot than what was selected, players are still awarded 12-free spins for themselves that they can re-trigger over again until out of chances or their coins run dry.

There’s always a chance of getting rewarded when you complete the combos with one element. Green cards are earth elements, blue cards are water elements, cyan cards are air elements and red cards are the fire elements which fill up your meter for that specific symbol. Once the energy has been donated to an elemental icon on either side of the reel, players will be given three random choices from those respective icons in order to win between 6x – 11x their stake!

The reels and symbols are well-designed, the theme is integrated into each part of this slot game. This slot has interesting bonuses that fit in with its overall aesthetic as well as being fun to play for any mystical people out there. Why not try this slot for free with CasinoNZ.