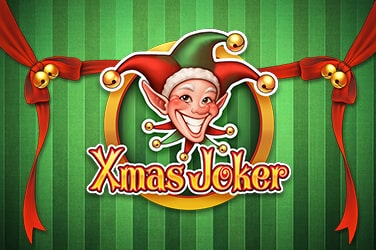 Xmas Joker is a Christmassy slot by Play’n GO, one of the world’s most popular slot developers probably most famous for their Rich Wilde adventure slots.

This festive slot was first released in 2015 and features three reels of holiday cheer, with symbols including candy canes, bells, and – of course – jokers appearing on the reels.

Xmas Joker is a pretty simple slot offering play across just five paylines, which means in terms of base gameplay this slot has more in common with traditional fruit slots than it does with other contemporary feature slots. The slots highest paying symbol is the gold star, which pays 50x the bet for three, while three bells pay 40x, three baubles pay 30x, and three candy canes and three gingerbread men both pay 10x. And that’s it – literally the whole slot’s paytable in a single sentence.

You might already be getting the idea: Xmas Joker is a pretty simple slot. However, it does offer a Free Spins bonus feature. This is triggered from the base game when players land three Joker Scatter symbols anywhere in view, which unlocks a total of 10 free spins. On top of this, during Free Spins, players can land 10 present Scatter symbols to win an additional 10 free spins, and this can be retriggered up to five times for a total of 50 free spins in a row. Landing two or more Xmas gifts on the reels during Free Spins will also net the player a bet multiplier cash prize of between 1x and 100x the current bet; sometimes this might just be a small win but it’s certainly got the potential to land a nice prize in a single spin.

Offering an average return to player of just 93.99%, Xmas Joker isn’t the greatest Christmas gift we’ve ever received. What this means is that for every $100 players spend playing Xmas Joker, they might win back an average of $93.99. This is below average, and so unless players are really keen on this slot’s gameplay, there’s little point opting to play Xmas Joker over the many other festive slots out there with returns of over 96%. It is, however, a medium variance slot, which will suit players who like slots offering a good balance in terms of win size vs frequency.

Xmas Joker is, it must be said, a pretty simple Christmas slot from Play’n GO which these days looks a little simplistic compared to the likes of popular festive slots like Santa vs Rudolph. The slot’s Free Spins feature is basic, and it feels more like Play’n GO have felt the need to include a token bonus feature in this slot rather than making an effort to design something new and fun. All this combined with a lower RTP means there’s little reason to play Xmas Joker these days. Unless you like your slots super simple, most players would be better off leaving this one off their Christmas list this year.