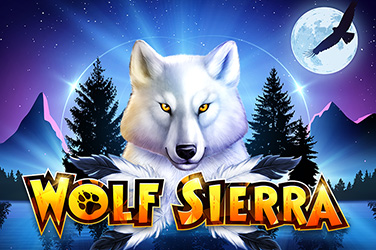 It’s time to answer the call of the wild in Wolf Sierra, a slot that takes you deep into the heart of the American wilderness for an exciting and spiritual holiday with the wolves. There’s something romantic about the wild, free and pure life of a wolf pack surviving on its wits out there in the forest, with only luck and nerve standing between you and an uncertain future. Perhaps that is what makes the setting appeal to pokie players so much! So will you emerge as leader of the pack, or will you get hopelessly lost in the woods? Let’s take a look in our Wolf Sierra slot game review.

The Wolf Sierra slot game takes a very naturalistic approach to depicting wolves in the wild, with gorgeous and colourful natural scenery being the predominant feature in this slot. The background to the reels is a stunning mountain vista that could be anywhere in the American Pacific Northwest or Western Canada, complete with lush pine forests and gushing waterfalls, while the symbols on the reels are equally well done: Majestic bald eagles, white wolves, grey wolves and even Native American totem poles, while the lower value symbols are the standard nine to ace drawn in bright colours. Alongside the imagery the soundtrack is pretty supernatural, with chimes and Native drumming overlaid with the sound of wolves howling.

In terms of the actual gameplay you already get a little bit more for your money in Wolf Sierra, because there are four rows and five reels from the beginning rather than the usual three, as well as 40 pay lines on which you can bet up to £/$/€100. That’s a pretty generous starting position, though it’s tempered somewhat by the payouts, which at their maximum are 25x your stake for five of the grey wolf. That isn’t massive, but this is a game that saves its big payoffs for the bonuses, so it’s more of an exercise in waiting until you trigger them. Still, the RTP is only just under average at 95.9%, so there is still plenty up for grabs in this pokie.

The bonuses in Wolf Sierra aren’t actually that complicated, but they can be very rewarding, so listen up! The key to the cash here is the white wolf wild, worth 50x your stake for five on its own, which is nice – but the biggest news here is that it can land stacked to take over whole reels. You might get a couple of reels filled this way in the main game, but if you land three of the dream catcher scatters you can activate the free spins. You get five to start off with, but every scatter you land subsequently gives you one more, and you’ll also find that the stacked white wolf wilds are sticky in this feature! This means every one that lands will stay put for the rest of the feature, making it much easier to fill all of the reels with wilds. Manage that and you get the game’s highest payout of 2000x your stake, or £/$/€200,000 at maximum bet!

As well as being gorgeous to look at, Wolf Sierra has a couple of nifty features that can help you win a ton of money. It’s not the flashiest, not the most complicated or the best looking slot out there, but it’s secretly got some really powerful features that pay excellently when used right, which makes it a great option in our book!