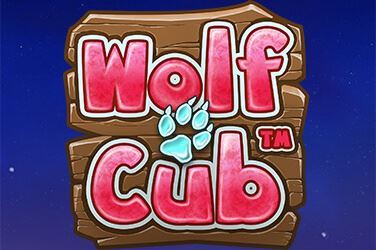 Wolf Cub is a cute slot by NetEnt, the giant Swedish developer responsible for making many of the world’s favourite online slots since 2006.

This slot brings players to the snowy forest, where a wolf cub sits aside the reels and cheers you on while you spin reels of nocturnal animals, moons, and more. It’s a sweet slot for animal lovers with a few features which lift it up beyond its peers.

There is just one special round to play in Wolf Cub, although it boasts a few bonus mechanics to keep things interesting. The game offers a Free Spins round which is triggered when three or more moon Scatter symbols land on the reels. This will prompt a bonus round in which players spin the reels to determine how many free spins they win; each reel will be packed with numbers, and when the reels stop the player will be awarded the number of free spins shown on the reels. The Free Spins mode also includes a fun Blizzard feature. This feature is triggered whenever reel one lands fully stacked with matching symbols. Identical symbols elsewhere on the reels will then ‘spread’ leftwards until rows of identical symbols appear on the reels. This feature doesn’t trigger very often but when it does, the wins can be significant.

Wolf Cub offers an average return to player of 96.34%, just a little over the average for a modern slot like this. What this means is that if you spend $100 on the reels, you can expect to win back around $96.34 on average, although of course, many players exceed this (and some don’t manage it). It’s also a medium variance slot, so it’s well balanced for most players in terms of how frequently wins land. Both casual and serious slots players might find a lot to like in this cute slot.

If you’re into cute animal slots like Panda Pow and Foxin Wins, then Wolf Cub is a must-try. With a generous RTP and an interesting Free Spins mechanic, Wolf Cub attempts something a little different without being confusing or complex. It’s not a slot for players looking for groundbreaking new features, but it’s not a carbon copy of every basic Free Spins slot out there. I enjoyed Wolf Cub, and I think many other players will too.