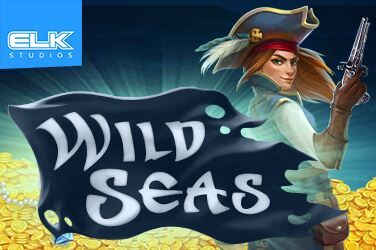 Pirate Anne Bonny has taken over the West Indies. The ocean is her hunting ground, and she hunts with a vengeance! This rollicking pirate game is the type of adventure slot you can expect from Swedish producers ELK Studios.

Can you face the French, Portuguese and English navies to claim chests of gold, or will you be made to spend an eternity with Davy Jones? Find out on the Wild Seas slot.

We couldn’t help but smile at the video game-style introduction to this slot, featuring some exceptional hammy acting and outrageous French accents, coupled with great looking CGI. The naval powers have a price on Anne Bonny’s head and only you can keep her alive and plundering, perhaps she’ll share her booty with you.

The harbour, which at a glance appears to be tranquil and inviting, is the last place on earth Anne would want to visit. The high-value symbols are three menacing captains hellbent on hunting down Anne who sport the flags of England, France and Portugal. The symbols with the lowest return are golden ad silver octopus engraved coins.

The design and graphics on display are brilliant, the main characters are depicted as caricatures within the highly detailed world they inhabit. Even the soundtrack works brilliantly alongside the design to set the mood perfectly. Along with these features Wild Seas boasts 178 ways to win across four rows and five reels.

If you’re looking for scatters, wilds or anything like that in this game then look elsewhere. There are no such thing but there’s plenty of rewards to be had regardless: Anne herself is the highest paying symbol and will reward players who land five with 1000x their stake! The RTP (Return to Player) of Wild Seas is a respectable 96.3% and the top bet to be placed is £/$/€100. Brilliant jackpots are available to be won on this medium to high variance game if you are willing to take the risks.

Besides the theme and great visuals, there isn’t very much action in the main game. Luckily, ELK have pulled it out of the bag with a brilliant bonus round. Two wilds will activate the bonus rounds in which a spinning coin will appear with each nations flag on it, whichever country it lands on will be who Anne and her shipmates will attack. The English ships have the most money and so you will be hoping for the coin to land on them.

Once the coin has stopped spinning, the right reel fills with walking wilds in a form of little ships. They move one step to their left each time they get spun around. It is at this time that another symbol is introduced to the game, Annes pirate ship. This shoots down a walking wild ship if it lands in a row behind one. The ships all have three lives each, and for each one you manage to sink you get a sticky wild treasure chest that remains for the rest of your spins, generating more and more wins.

This nautical adventure slot is a fun game for anyone, the best thing about this game has got to be the bonus round, the feature that this brings is both fun and rewarding. If you would like to try another Elk Studios slot we can recommend Tahiti Gold, a hugely popular and rewarding slot we have available.