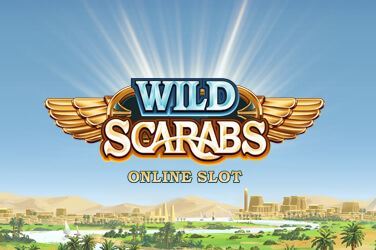 Wild Scarabs gives us something you don’t see very often, which is an Ancient Egyptian themed pokie set in the pomp and pride of that empire’s history, not among its rotting remains. Instead of spooky tombs, dusty mummies and statues buried under the sand, there are gleaming white pyramids, lush vegetation and prosperous towns by the Nile. It’s a nice little touch in what is a very packed genre, but will all the wealth of Egypt on display rub off on you, or will you be disappearing beneath the sands? Let’s take a look in our Wild Scarabs slot game review.

It can be hard to believe that anyone ever built a wealthy empire on the bare, dry sands of Egypt, but it’s less well known that Egypt used to be much greener, and date palm groves and vast reed plantations used to lie where there is now just desert. The image in the background of the reels is how it used to look, and you can also see all the temples and obelisks standing complete as they did when they were built, crowned by the gleaming white surface of the pyramids, capped with gold tips. The symbols on the reels look great too, and while the low value symbols are simple geometric jewels, the high value symbols are images of the gods that look to have been made from gems: Set, Anubis, Ra and the Ankh alongside a golden scarab. Epic but stereotypical Egyptian music plays in the background, while simple animations add a touch of movement to Wild Scarabs.

The game has a three row and five reel setup, but with 243 ways to win there is a little more than meets the eye at first, with a maximum bet of £/$/€60 per spin. There is actually a maximum win of 1,733x your win available on one spin in this game, which puts paid to the myth about 243 ways slots being stingy, and with an RTP slightly above average at 96.28% you can be pretty sure of adding to your prize kitty in this slot!

As the name implies, the scarab wilds are a big deal in the Wild Scarab slot game, and provide the key to the game’s two bonus features. The first can be activated during the main game, completely at random, and happens when you get a losing spin featuring a scarab wild on reel three. When this happens another four wilds will be added to the reels, greatly increasing your chances of a loss turning into a win. The free spins game is similar, activated by landing three or more scatters, and it grants you ten spins. In this game every scarab wild that lands and doesn’t form part of a win is collected instead, and as soon as you collect three of the wilds they will be added to the reels on your next spin, potentially generating a big win. If you also happen to land a few wilds on that spin normally, you can get virtually the whole board wild!

With a refreshing twist on the Eqyptian theme you might be used to and a fun and engaging twist of a bonus game, there’s a lot to like about Wild Scarabs. It’s not a pokie packed with features, but with some decent prizes and a fun bonus game, there are plenty of adventures to be had out on the sands!

Do you love slots? Then take a look at these titles: Age of Conquest, Anderthals, Arena of Gold and Lady Earth.