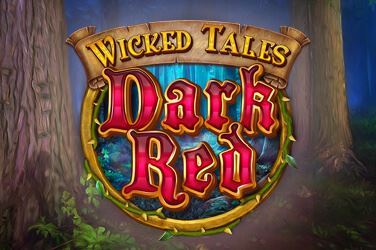 In a collaboration between Microgaming and Triple Edge Studios, the Wicked Tales: Dark Red slot game takes fantasy theming to an entirely new level. With what appears to be horror-inspired graphics fused with Little Red Riding Hood’s world, players are taken on a journey that you don’t want to miss out on!

The game display of the Wicked Tales: Dark Red video slot is quite creative. With five reels that seem to wander around from time-to-time, it’s a pretty unique experience with some interesting characters and symbols on offer as well! The design features 25 fixed paylines for you to work your way through while Js, Ks, Qs and Aces act as the real focal points alongside candles, coins, wolves, pendants.

The return to player (RTP) percentage is how much money should be returned on average to each player, and while Wicked Tales: Dark Red slot game is different in lots ways, the RTP figure is still important to slot game fans.

The final RTP number here comes in at 96.10% which is above the standard industry average for slot games. It also has medium volatility which leads me believe that players will enjoy steady amounts smaller wins, there is also the potential to land some nice wins too.

Players will be happy to know you will be able to play from as little as $/€/£0.25 or up to maximum stake of $/€/£200. If you happen to win big time then there is some great prizes for you too: 5,000 times your initial wager amount or more!

The contrast between the seemingly innocent background and dark secrets that lie beneath is beautifully captured in this video. The soundtrack sets up an ominous stage for all of these surprises to come, but what you will see next may just catch your off guard!

The spinning reels bring three new symbols on the screen which is a gamble that will increase your luck of winning. The Dark Red logo not only acts as wild, but also replaces any other symbol with exception to scatter and full moon combined if you happen to get 3 in a row! If those two show up then it’s time for the Wolf’s Wheel Bonus where you can spin this wheel while earning prizes worth decent cash winnings. For more excitement between these cool bonuses there’s Forest Of Fortunes Pick Bonus that has increased multipliers making every bet worthwhile so give it try today with one of our promotions.

The Wicked Tales: Dark Red slot game takes conventional genres in an entirely new direction and improves upon them. The potential winnings are great, the gameplay is fun to follow, and there’s a built-in story that will keep you on your toes!