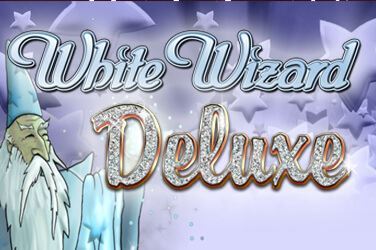 Eyecon are back with a much-awaited sequel to White Wizard: White Wizard Deluxe. Just like the original, the slot has a crazy wizard character and a fantasy theme. This game is slightly different for Eyecon as it uses a 5 reel and 100 payline format.

On offer in this game includes trebled wild wins, expanding wilds and a max of 400 free spins. Play from only $1 to $50 a spin and enjoy the great bonuses on offer.

The design of White Wizard Deluxe is fairly similar to the original, with a few changes in symbols. In this version, the playing card symbols span from A-9 rather than just to J. There is also a brand-new shimmering blue orb which can multiply your stake by 5. The unicorn and ice lantern still pay up to 10x, and the spellbook pays up to 20x. When you land the cauldron you can pocket a max of 30x your original stake.

The white wizard is back again as the wild. When he lands on the odd reel he expands and fills the whole reel. Any winning combos with this wild will get a 3x multiplier. Once again, the chubby blue dragon is the scatter, and landing this can give you a maximum payout of 300 times your total stake. This will also trigger free spins, with a total of 400 free spins up for grabs.

There is some important difference between White Wizard Deluxe and the original White Wizard. In the new version, there are 100 paylines. Also, the expanding wilds can be used in the base game as well as in the feature. Moving a slider in the game allows players to control the number of lines they are playing. The design hasn’t changed too much but the new additions do make the game more fun to play.

This sequel to White Wizard has been developed by Eyecon Gaming. As leaders in the online game industry, Eyecon have produced a range of entertaining slots over the years.

The RTP of White Wizard Deluxe is 95.5%, which is higher than the original game. This is around average for a return to player percentage, which refers to the chance of a player winning money from the game. With this RTP, it may be a risky strategy to go big on the line numbers early in the game.

Like its predecessor, this new game has great bonuses. The wizard symbol can be substituted for any other symbol, only landing on the odd reels. Wins achieved with this pay out 3x times the normal rate. It also expands to land on all reel positions.

The dragon scatter gives the chance to win free spins. The number you have depends on how many spins you get, with 25 spins awarded for getting 5 dragons. You also have the chance to gamble your winnings with the gamble button. Either leave with nothing or double your win.

If you loved the original White Wizard, you need to try White Wizard Deluxe. While the graphics are still relatively simple, the bonuses offer players the chance to win big.

If you’re looking for slot magic, why not try Delhi the Elephant, Ecuador Gold, Tahiti Gold and Furlong Fortunes Jumps.