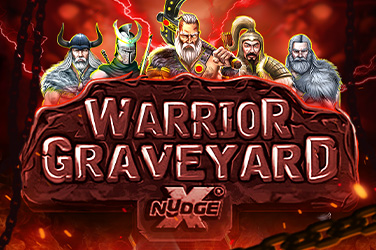 There’s nothing bright or cheery about Warriors Graveyard by NoLimit City, and straight from the title there’s a building sense of doom. Set in the aforementioned graveyard, it’s up to you to pick through the bones of the not-quite-dead to find valuable trinkets and cash. But will you leave that cursed place with a fortune, or will you join the unhappy dead in their tombs? Let’s find out in our Warriors Graveyard slot game review.

It’s all darkness in Warriors Graveyard, and from the background to the symbols on the reels you start to wonder if you’ll ever see the sun again. Behind the reels a graveyard fills the screen, with a light mist curling around broken headstones like crooked teeth, while the full moon shines down on the tomb that hosts the reels. The symbols themselves are all dangerous looking weapons and armour including swords and warhammers, battleaxes and breastplates, helmets and shields, while some of the cemetery’s occupants appear full sized in their graves still wearing tattered clothes and bearing swords. The visuals are without a doubt fantastic, and combined with the excellent visual effects it really serves to build an amazing atmosphere. Every spin is accompanied by spooky music, tolling bells and creaking skeletons, while each time the symbols stop feels like tomb lids crashing to the floor. The animations are also great, with each symbol coming to life as part of wins.

The excitement continues in the mechanics behind the Warriors Graveyard slot game, which gives you an extra reel to play on from the start, with six reels and three rows in the layout. This means there are 25 pay lines available, on which you can bet up to £/$/€100 per spin, so the winning potential is already there. Like many games these days the big wins come in the bonuses rather than the main game, so don’t be alarmed that the highest normal payout is 6x your stake for one of the grinning skeletons in battle gear, and you can be reassured by the above average RTP of 96.15%

So if the main game is a bit bare bones, how do the features fare? This is where Warriors Graveyard gets fleshed out, and it starts with a couple of nice extras in the main game. xNudge is at work in this game, the system invented by NoLimit City, so when large symbols land partially on the screen they get nudged slowly downwards until they’re fully in sight. Each nudge adds a multiplier to the spin you get after the nudging is finished, and if multiple wilds do this at once you can get a multiplier of up to 12x! The game also has a free spins round triggered by landing three to six scatters, called Graveyard Spins if you land up to five and Death Spins if you land six. The basic premise is that you get up to 14 free spins during which every nudge multiplier applies for the rest of the spins, and in Death Spins you get this plus the wilds that nudge onto the screen also become sticky for the rest of the spins.

Warriors Graveyard is yet another pokie triumph for NoLimit City, bringing that classic combination of amazing, video game quality visuals and inventive game modes and bonuses. More wins in the main game would have been better, but the awesome bonus rounds more than compensate!