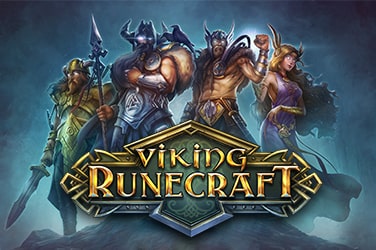 Viking Runecraft is a historical adventure slot released by Play’n GO in 2017, a provider who boasts a long history with adventure slots. Play’n GO developed some of the world’s best-loved adventures including Book of Dead, Legacy of Dead, and Octopus Treasure.

Viking Runecraft is a feature-packed slot which gives players the opportunity to win up to 5000x their bet in a single spin.

From the moment Viking Runecraft loads, it’s a great looking slot. The grid is filled with beautifully illustrated symbols, and behind the reels, players can see a deep icy cavern with snow gently falling past the view. To the right of the grid stands the current level God, who watches over the reels and occasionally triggers a random feature.

There are plenty of bonuses to watch out for in Viking Runecraft. First of all, the slot takes place over four levels, and players advance through these levels by landing wins in the right locations on the grid to clear patterns. Each level comes with a new level God, who randomly triggers features on any spin, most of which revolve around the creation of new Wild symbols on the grid. The Charge of Destruction also charges while players spin, charging up for every winning symbol in a cluster. After 20 winning symbols have landed, one of the Charge’s features will trigger; most of these features destroy symbols on the reels to increase the chances of a win landing. There’s also a Free Spins round which is triggered by winning on 20 symbols after triggering the Charge of Destruction. This round is called Ragnarok, and during the round, each Charge of Destruction feature will activate once, for some fantastic wins.

Unfortunately, Viking Runecraft’s return to player is a slightly lousy 94.66%, a couple of points below what we’d hope to see in a slot like this. This is one of those slot’s where the RTP can vary between casinos, though, so it’s worth checking to see if the casino you’re playing at can offer a better return because at some casinos it can be as high as 96.7%, which is much better.

Viking Runecraft is a great slot with some really fun features in play. There’s lots of variety here to keep new players happy for some time and it’s really well worth a few spins (or more).