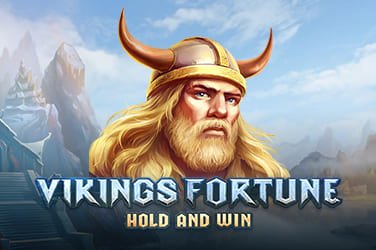 Bringing an epic saga of Norse mythology to life can be an incredibly difficult thing to do, especially within the context of the slot industry. As such, admiration needs to be given to the Vikings Fortune: Hold and Win slot game for even giving this unenviable task a go.

Today, we’re going to take a look at whether or not Playson has succeeded in their attempts to excite and intrigue the punters.

We’re quickly transported to an epic trip, seemingly across the fjords, with a story that is easy and fun to follow in the Vikings Fortune: Hold and Win slot game. We have the standard reel layout to enjoy of 5×3, and in addition to that, it is a 25 payline game engine.

There are many ways to come out victorious in this slot and the majority of them involve the key symbols – most of which are themed. We’ve got the raven, wolf and young Viking woman to go alongside the standard playcards that can be found in the majority of modern slots.

The return to player (RTP) percentage is a crucial ingredient in most slots, mainly because a lot of players want to know what they’re getting themselves into before financially committing to a game. Some prefer to go in blind, but as is the case with most, the Vikings Fortune: Hold and Win slot game cannot escape this scrutiny.

The reported RTP figure that comes in here for Vikings Fortune: Hold and Win is 95.20% which, it’s safe to say, is considered to be below average in the grand scheme of the industry. Still, with the volatility being placed at medium to high, big risks can lead to big rewards.

That has never been more evident than in the potential winnings, either, as you could walk away with 1,000x your initial stake – which is impressive given that the minimum to maximum stake is 25p to £100.

Some will say the gameplay itself isn’t particularly overwhelming but from a design point of view, we have to say that we really enjoy it. The soundtrack is a bit too slow for our liking, but it’s a steady slot that implements the respectful Norse culture with style and elegance.

The shield is the wild symbol and can replace any and all other symbols on the board outside of the scatter, which is the treasure chest. The Free Spins feature is triggered by landing scatters on the 1st, 3rd and 5th reels, boosting your financial hopes in the process.

The other symbol of importance is the golden coin, and if you land five or more of them, you’ll be rewarded with a streak respin. You will also have the opportunity to win one of three jackpots – the Mini, the Major or the Grand.

The Vikings Fortune: Hold and Win slot game in unassuming in the way that it creeps up on you, but the rewards are there for all to see. The marketing could be a little bit crisper but once you’re in the thick of the game itself, you can just see the effort that has been put into it.

It’s slick, and that’s good enough for us.