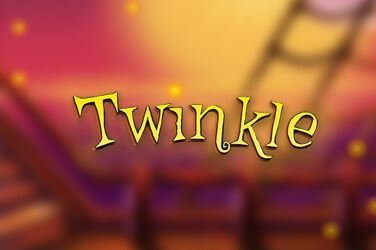 Do you believe in faeries? Because if not then you’d better start, because you’ve just been catapulted off into an adventure with them! There’s more than a little of Tinkerbell in Twinkle, who resembles the Disney character, while the pirate ship setting and adventure on the high seas is straight out of Peter Pan. But don’t think this slot is childish just because of that, because there are some seriously big wins to be made in this pokie that could land you with a life changing wedge of cash! So is this slot a magical adventure or did it just never grow up? Let’s take a look in our Twinkle slot game review.

Twinkle is absolutely brimming over with fairy dust, so much so that every surface and symbol seems to sparkle with it! In the game you’re on an old fashioned tall ship out at sea, and there’s a lovely sunset taking place on the background behind the reels, while the foreground is a maze of wood and rigging. The symbols on the reels are all unique, and include various nautical items like the ship’s wheel, a treasure map and a pirates’ cutlass, as well as fairy items like fairy shoes and wands. The graphics aren’t cutting edge, but there’s so much colour and detail that you can’t help but be sucked in.

The Twinkle slot game has five reels and three rows, with 25 pay lines to play with, where you can bet as much as £/$/€12.50 per spin. You could be forgiven at this point for thinking that this pokie is a little lightweight, but your mind will change when you see the payouts! At the top end you can land a massive 5000x your stake for five of the compass symbols, and the second placed map symbol still lands you 1000x for five. The very lowest payout is 100x your stake for five quill pens, which is still pretty high. There’s also a decent wild symbol in this game, represented by Twinkle herself, which doubles the value of any combo she’s part of.

The bonuses in Twinkle are simple but effective, encompassing a pick and win and free spins game. The pick and win is simple enough, activated by landing three green jars which you can then pick from, enabling you to win up to 100x your stake in one go. The free spins game is also pretty simple, this time activated by landing three or more of the Twinkle wilds, with five wilds getting you as much as 25 free spins. On top of that every win you collect in this game is tripled, so further pad out your bank balance. You can keep the free spins coming too, because it’s possible to re-activate this game up to 15 times by landing more wilds within the free spins.

Twinkle looks as fluffy and exciting as a bag of cotton wool at first sight, but it won’t take long before you realize that this faerie has an attitude. Some top quality prizes and a generous bonus round create a package that can make you rich in just a few spins, which isn’t bad for a tiny creature like Twinkle!

Do you want something with a little extra sparkle? You should try Bar X Hot Spins, Viking Wilds, Two Fat Cats and Valkyrie.