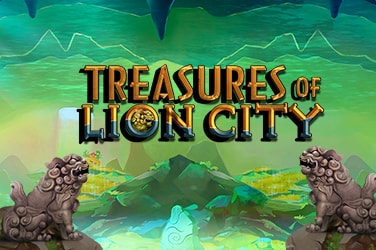 Treasures of Lion City is provided by two powerhouses of casino game development, Microgaming and Pulse 8 Studios. Microgaming is an award-winning supplier that has been operating for more than two decades, having been founded in 1994. Pulse 8 Studios was founded on the principle of making casino games that have a distinctively Asian flavour matched with powerful gaming machines.

The gameplay of Treasures of Lion City is one that will be familiar to many as a cascading video slot. The reel has 25 pay lines, sat in 3 rows across 5 reels. Players can win prizes by matching between 3-5 symbols on a line. The credit range is between 0.25-0.50 and the game offers medium volatility so there’s bound to be plenty of surprises for players.

The visuals of Treasures of Lion City are definitely the stand-out elements of the game. Featuring a cool-toned palette of greens and blues, the background of Treasures of Lion City is underwater to match the history of the location at which the game is set. The symbols themselves aren’t exactly groundbreaking, with designs such as treasure chests, letters, and mystical lions all commonly seen in the casino slot game genre.

The game heavily makes use of multiplier and modifier features, which adds an element of continual excitement for players. There is a process throughout the game called the Rolling Reels that starts at the beginning of a spin and continues until no winning combinations fall into place on the slot. The Rolling Reels feature explodes any winning combination to make room for new symbols, improving your chances of a big win.

The other main feature of Treasures of Lion City is the Win Meter feature. Win meters are common in slot games so it’s good that Pulse 8 Studios included this. In Treasures of Lion City, the Win Meter is a progressive bar that sits at the top of the game box and will activate following the first win of a cascade, and continue to fill with every winning cascade you trigger.

One of the areas where Treasures of Lion City falls short is its lack of bonus features. While by no means a necessity for a slot game, bonus features are increasingly becoming an expectation for players, so it would have been nice to see more experimentation and innovation from Pulse 8 Studios.

The Return to Player (RTP) rate for Treasures of Lion City is a rather disappointing 94.20%, which is below the average 95% you can expect from a slot game.

It’s clear that Treasures of Lion City is by no means a stand-out slot game, with its lower-than-average RTP and a lack of bonus features. However, it has clean visuals and a lot of the standard slot features fans of the genre expect, which places Treasures of Lion City firmly in the range of games that are still playable and enjoyable to many.