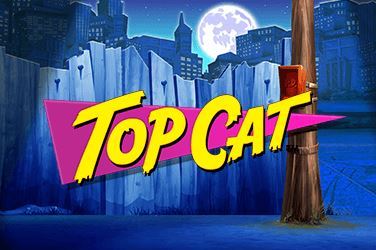 It will come as no surprise, but the main characters of Top Cat Slot Game are the hugely popular Top Cat and his merry gang of cats, which includes cute little Choo Choo, buffoon Benny the Ball, Spook, Fancy Fancy, and of course Officer Dibble.

The game has been impressively built in cartoon style by NYX/Blueprint Gaming, who are a UK-based gaming production studio and form part of the German Gauselmann Group.

The rules for this game are not complicated. With every spin, you get 20 paylines. You take your chance by clicking the Total Bet button and making your selection. To get the reels rolling, you click Spin or Autoplay. The Autoplay button will open a new window where you can select a loss limit and number of spins.

If you’re an experienced player, the symbols in this game don’t need any explanation, but if you’re a newbie to video slots it’s worth noting that Wild symbols can substitute all symbols with the exception of the Scatter and Bonus. In this game, the BonusWild, Bonus, and Scatter symbols are all in play.

NYX/Blueprint gaming have done a terrific job and kept the design in keeping with the original TV show. So, if you’re a fan of the series that was originally televised back in 1960, you’re going to love the nostalgia this game will bring.

The game is packed with features that can appear randomly.

Brain’s Water: Brain appears and uses his wrench to release water from a fire hydrant near each reel.

Choo Piano: Choo appears at the centre of the reels. Brain swings a rope and a Piano drops on Choo’s head which creates stars that float onto the reels and the symbols turn into wilds.

Spook’s Mice as Nice: TC gets out of his rubbish bin and blows a whistle. Mice appear and re-arrange the symbols on the reels until Officer Dibble puts in an appearance.

Benny’s Colossal TVs: Benny appears as the reels spin, he presses a button on his remote control and this adds TVs with symbols to the reels containing a mystery prize.

These appear on reels 1, 3 and 5 and trigger Master Plan Bonus games.

Cash Picker: Pick rubbish from a garbage truck and see if you win. Maharajah Heist: Roll a die to win big money.

Diner Free Spins: The TC gang are at a diner. Tickets let you buy dishes with random bonus values.

Dibble’s Free Spins: Wild symbols appear and bump into or cover any number of reels.

Construction Site Wilds: Wilds appear, which allow you to collect TC stickers. The more you get, the more free spins you’ll win.

Fancy Fancy’s Hot Dog: A hot dog vendor appears, and the gang all appear with fishing rods that keep re-spinning the reels.

This really is a fantastic slot game with a visually stunning and popular theme, and it’s packed full of opportunities for bonus plays. It takes a while to familiarise yourself with all that is taking place on the screen at any given point in time, but it’s well worth the investment.