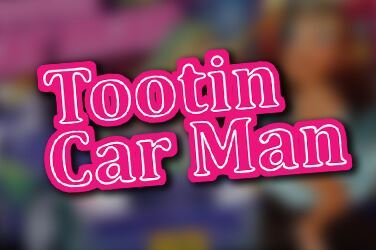 Tootin’ Car Man is based on a pun: It’s about an Ancient Egyptian who comes to modern Las Vegas. He drives a car. Get it? Tut-ankh-amun? If you’ve got this far then there’s a good chance you’ll enjoy this funny slot, because it’s got a lot more going for it than just the bad punning. Peel back the surface and there are some good old fashioned bonuses on display that can really rake in the cash if you’re savvy with them, but can this slot overcome its title or should you walk away now? Let’s take a look in our Tootin’ Car Man review.

The graphics in Tootin’ Car Man aren’t the most beautiful, but they certainly set the scene, with a scene of the Las Vegas strip in the background bathed in orange sun as if it stood on the sands of Egypt itself. All the casinos in the area have Egyptian themed signs, and there are people milling about outside. The symbols on the reels are all original, and include common casino fare like chips, roulette wheels, chorus girls and casino signs, while mixing them up with a modified car, a camel smoking a pipe and a mummy carrying a casino sign.

The main game has a pretty traditional layout of five reels and three rows, while there are 20 pay lines with a maximum bet of £/$/€40 per spin. The Cleopatra chorus girl pays the most in this slot, chalking up 400x your stake for five in a row, though even the lowest paying casino chip symbol pays 100x your stake, so there are no bad options here. The RTP is a little low in the Tootin’ Car Man slot game at 95%, but this is another of those pokies that saves its biggest wins for the bonuses, so don’t be discouraged!

The bonus round is where Tootin’ Car Man really lets loose, and you get one or two random bonuses even in the main game, such as when Tootin’ Car Man himself speeds across the reels and turns your symbols wild. The second bonus we’ll look at is Roulette, activated by landing three Roulette wheels on one spin, causing Tootin’ Car Man to drive crazily around a wheel and stop at different points, which win you different multipliers of your stake.

The biggest bonus of all sees you join Tootin’ Car Man behind the wheel, where you’ll get to roll a succession of fluffy dice and guess whether the total will be higher or lower. You can keep playing this game over and over, and it even saves your progress so you won’t lose it all, giving you plenty of opportunity to win big

Finally, this slot has a gamble feature that lets you bet any win on the colour of the next card drawn, double or nothing. If you’re feeling particularly rash you can quadruple that figure by trying to guess the suit too, which can send your wins to the stratosphere!

Tootin’ Car Man is an old fashioned pokie that concentrates on the fun rather than the frills. There is a great selection of bonuses which could cheer up your bank balance if you win, and the ability to gamble it all for quadruple your prize just puts the cherry on top!