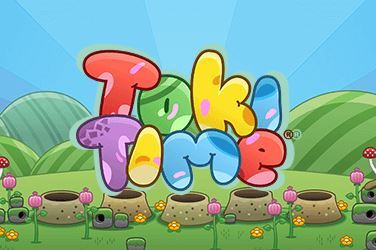 Toki Time is a quirky little slot game from developers ThunderKick that is reminiscent of any number of little Japanese cartoon characters you may have seen over the years. The Toki live in a pleasant, green little world surrounded by plants and mushrooms, popping out of holes in the ground to join the fun on the reels. So it’s a little different from the norm, but that’s not usually a problem if it pays well! So is Toki Time a strange little gem, or is it just too out there to take? Let’s take a look in our Toki Time review!

It’s hard to talk about the Toki Time slot game without talking about the visuals. It all looks inoffensive enough, with cuddly creatures like deer and sheep, rabbits and raccoons appearing in a distinctive cartoonish art style with little black eyes and rosy cheeks. But why are their necks so long? And why do they come out of the ground like that? We have no idea, but there’s no denying that this game looks unique, and we loved the transition between the smiling sun in a blue sky with a friendly moon in a purple twilight that happens as you play. There’s even a happy sound track to go in the background, so this game does a great job of setting the scene.

It’s probably not a surprise that a game which looks so cartoonish is quite simple, but it is. There are five reels and three rows, 11 pay lines to play on and a maximum bet of £/$/€100 per spin. More interesting is the payouts, which top 2400x your stake if you get five of the shooting stars, while a rainbow pays 1200x. The lowest symbol, the little yellow Toki, still pays 200x your stake for five, which is more than some jackpots in other slots. The result of this is an unsurprisingly high RTP of 97.1%, which is amazing for a modern slot. It also allows you to win both ways, not just left to right, which is like having twice the pay lines.

Toki Time is one of those rare pokies that gives you a lot of its gold in the main game, so there aren’t too many bonuses to talk about. One feature that this game does have though is its expanding wilds. This is where the scary long necked sheep comes in, who pops out of the ground and pokes his head up to the top of the reels, where any win he generates grants an automatic re-spin with him still in place. You keep re-spinning as long as you keep winning, which is great for your bank balance. If you can manage to get two sheep on your reels at once then you’re in the money, when you combine this game’s bonus with its great payouts.

We can forgive Toki Time for looking a bit odd because it simply pays exceptionally well, with a high RTP and some tremendous top paying symbols. If the animals are cute, if strange, you won’t care if you land a couple of long-necked sheep and start raking in cash!