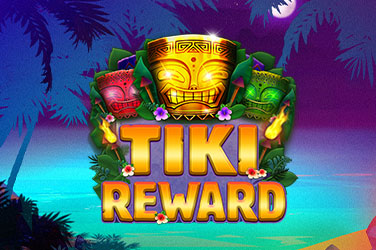 The Pacific Islands are hard to top when it comes to sun soaked, seafoam beauty, but there are also rich cultures dotted all over the vast area of sea from Hawaii to the Solomon Islands. Tiki Reward celebrates the fun, fire and fantasy of a festival among the Pacific Islanders, with scary looking Tiki masks all over the reels as well as plenty of flames and beautiful flowers underneath the palm trees. But don’t let all the natural beauty fool you, there’s plenty of gold out there if you know where to look. So will you leave the party rich, or wake up with a hangover? Let’s take a look in our Tiki Reward slot game review.

There aren’t too many surprises in terms of the theme in the Tiki Reward slot game: It’s all sun , sea and sand as far as the eye can see, with a few palm trees overhanging the screen thrown in for good measure. The symbols on the reels are pretty typical too, and while there are the standard 9 – A symbols to fill in for the low value symbols, the high value symbols are done in the style of patches and include sea turtles, hammerhead sharks, lizards and the famous Hawaiian hibiscus. More on the Tiki mask later, but the background is a solid tribal drum beat that will keep your heart pumping.

You get a whopping 50 pay lines in Tiki Reward, which is a tempting way to start the game, though the layout is the standard three row and five reel setup, and you can bet up to £/$/€100 per spin. The downside to this is that the payouts are pretty low, with a maximum of 2.5x your stake as a reward for landing five turtles. Having said that, the tradeoff is that you’ll win a lot more than usual: which explains the above average RTP of 96.25%. There are four different coloured Tiki masks, but in the main game these simply act as wilds that give a 2x multiplier to all your wins with them.

If you’re wondering where all the cash is supposed to come from in this pokie, then welcome to the bonuses. Tiki Reward has two main bonus games, the free spins and the jackpot, though they’re sort of one and the same. Three scatters gets you seven free spins, during which one colour of Tiki mask will be chosen and the middle three reels will be surrounded by fire. The main conceit of this is that only golden Tiki masks and masks of the chosen colour will land in this part of the reels, meaning you get a much better chance of making combos, and the prizes are improved with three of each mask awarding the listed prize on the left of the screen. This tops out with the Golden Tiki, which can award as much as 2000x your stake for three.

Tiki Reward is a high variance pokie, meaning that you could be scrubbing around making a bit of money here and there before you suddenly strike it big in the bonuses. It’s not for everyone, but who can resist the lure of that massive win that changes your life?