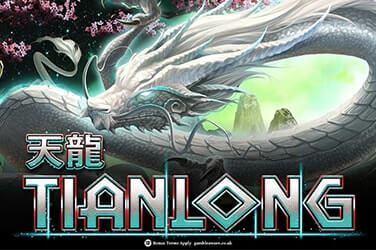 Tianlong is a mythical dragon race in Chinese folklore that is said to be a symbol of power and a portent of luck and good fortune, which is probably why they decided to make a slot dedicated to it! Sacred to both Buddhists and native Chinese religions, it is typical to visit shrines in the mountains dedicated to Tianlong, because that is where they are thought to live, and this slot represents that spiritual journey. So will your offering be accepted and will you be blessed by the favour of the lucky dragon? Let’s take a look in our Tianlong slot game review.

Tianlong is quite a spiritual pokie as you might expect given the subject matter, which makes it a little more laid back then the frenetic, action packed slots you might be used to. That’s no bad thing though, and from the glorious mountain vista fringed with blossom behind the reels, to the simple slices of spiritual life on the reels, you’ll feel relaxed in no time. The symbols are unique and include carved stone offerings, prayer bracelets, sprigs of holy blossom, bonsai trees and Chinese style lanterns. Alongside the calming music in the background, doctors should really prescribe this to help you relax!

The layout of the slot is traditional, encompassing five reels and three rows, while there are ten pay lines to play on, on which you can bet a maximum of £/$/€250 per spin. There is a wild and a scatter in this game, represented by the dragon and the phoenix respectively, the former helping to make combos by standing in for other symbols and the latter activating the bonus game. The RTP isn’t amazing, coming in at 95.24%, but the prizes top out at 300x your wager which is a lot of cash if you’re betting at the maximum!

To help pad out your bank balance there is also a set of bonuses to enjoy, the first of which actually activates in the main game. This happens when the dragon symbol lands anywhere on the reels, causing it to expand to take over the reel and generate a free re-spin. Any other dragons that landed on the same spin will also do this, and you get an extra spin every time another dragon lands the reels. Another bonus is the free spins game, activated by landing three phoenix scatters. This gives you 15 free spins right off the bat, but on top of that you can also activate the dragon re-spins, and you can get more free spins that way. Even better, you can reactivate the free spins from within the game by landing three more scatters, so there are loads of free spins to be had!

The Tianlong slot game is a bit of a change of pace from other pokies, trading on peace and tranquility rather than flashy graphics or sound effects. The results are rather nice, with a combination of pleasing visuals and some great bonus games adding up to a slot you’ll come back to again and again.