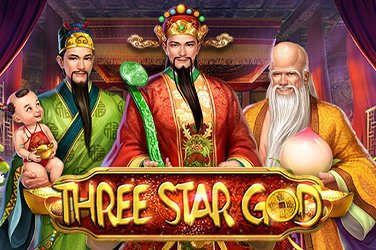 With 243 ways to win, three different bonus levels available and a simple Chinese theme, players who check out this Three Star God game review will be pleased with what they are about to learn!

Three Star God slot game is a creation from the team at SimplePlay and they have provided a title that features a Chinese theme that has been depicted in an impressive, stylistic and fun way via the use of graphics and visuals that have been used.

The background to the game features a scene in which players will see a blue sky with a number of traditional Chinese buildings all featuring in the background, whilst there is a playing grid that features a gold element to it, which further amplifies the theme that has been adopted.

There are a total of 243 ways to win available in this Three Star God online slot game, with the playing grid featuring a total of 5 reels and 3 rows. This Three Star God slot game review also found that there is the potential to place a maximum bet of $/€/£60 on each spin made, although Casino77 players can bet a minimum of $/€/£0.30 if they wish.

There are a number of different symbols available on the paytable of this slot game, with this Three Star God review finding no fewer than 12 could land. These consisted of the traditional playing card icons, whilst they were then subsequently followed by a number of Chinese-themed picture icons.

Players should be aware that Fu and Lu are the most rewarding on the grid when five are able to be landed as a winning combination as they can reward 500x the stake!

The game’s wild is the golden ingot, which will appear on reels 2, 3 and 4 and can perform substitutions as it can help to replace all regular icons and create winning sequences where possible.

This is the free spins game that can be triggered when players land three or more of the Chinese character scatter icons on the grid in any position. Players will then be required to choose which character they want to use, with each providing something slightly different:

Players will then see the free spins game be played out with one or two additional wilds on the reels that can appear at random. This game can be retriggered by simply landing three or more scatter icons once again.

The return to player (RTP) rate for this Three Star God online slot game is 96.04%, with the Three Star God review finding that the volatility level has been set at a high level, thus meaning there is some risk attached to the game, although this does also mean rewards can be big when they appear!

Indeed, this Three Star God slot review has highlighted just how rewarding this game can be and why it should be played immediately, as the win potential is rather brilliant. Of course, the free spins bonus feature is an added incentive, but with 243 paylines available, there are a number of opportunities to win some nice prizes!