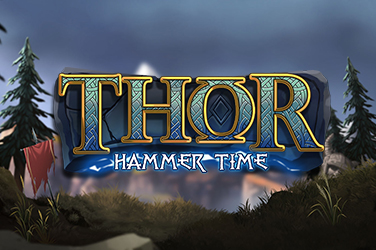 Thor Hammer Time is a slot game that puts the player in control of an ancient Viking, plundering and looting across Europe. Slot developers love going back to this age for inspiration and it’s easy to see why – all that loot!

The gods themselves want nothing more than to see their favourite mortals win big, will you be a Norse hero or a forgotten warrior? Find out more in our slot review.

NoLimit City has a reputation for pushing the boundaries of slot design, but in this one they have tried to keep it traditional with their visuals. This is represented in this slot by Scandinavian scenery and ravaged battle flags!

The symbols on the reels are very traditional, depicting all of Viking lore’s usual tropes. The low-value runes light up to form combos as they create a spectacle that is both old and new. Meanwhile, higher value items include winged helmets and jewel encrusted rings with decorated cups bearing axe heads or hammerheads in their centres for good measure!

The background of the reels is a grey stone slab carved with symbols, while sound effects and animations add to the stirring soundtrack.

This slot is a study in contrasts: players are incentivized more by the bonus rounds than they are the main game, and yet for those who wish to put down their maximum bet of £/€/$100 per spin there will be plenty of opportunities. The highest-paying symbol here is Golden Thor’s Hammer which pays 15x your stake! However, you can also win big during Bonus Rounds which can help boost an RTP that sits at 96%.

The bonuses are everything in the Thor Hammer Time slot game. Some of them, like Rune Raze and Hammer time have a random outcome while others activate by landing bonus symbols to generate separate features. The Runes transform low-value symbols into higher ones when you land more than one on an active payline with it’s corresponding symbol or better: for example three runes will turn any other symbol next to it into its rune equivalent (mind this won’t work if there is no “active” line), which can be very useful as players get closer to triggering additional free games from their regular spin results!

With Thor’s Lightning, you may get up to 7 random wilds and a multiplier of up to 4x. The bonus round triggers when landing on the 5th reel with two or more scatter symbols active at once – if this happens it will activate randomly giving players an opportunity for some big wins!

The scatter symbol is the key to this game. If you manage two of them then anything goes! The reels spin around and lock in place for a chance at three scatters, which will reward incredible free spins with multipliers and extra bonus symbols galore.

Thor Hammer Time is a thrilling game that relies on its bonuses to bring in the big payouts. Luckily, these bonuses can land quite regularly and generate some really exciting wins when they do! If you’re looking for an opportunity to take your shot at Valhalla– there’s no better place than this one!