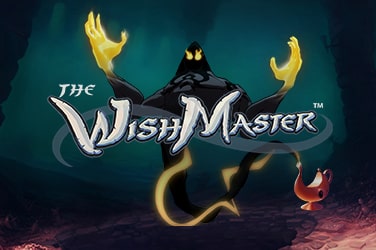 The Wish Master slot is a game that’s based on the tales of Aladdin and his genie. Released by NetEnt, a popular game developer from Sweden, this five-reel video slot has a lot of sizeable rewards for anyone who wants to try their luck on the reels.

Graphics are lifelike and the upbeat music adds excitement and energy to the game. The Wish Master will make the ideal slot for any gamer who likes a lot of bonus features.

Playing The Wish Master you will see three lines, five reels and 20 paylines. All of the reels are animated and this makes the gameplay more exciting. Betting levels start out at 0.01 coins per spin and go up to 0.50 for the high rollers. The game also has a lot of special symbols as well as a 9.6.6% RTP rate.

On the reels, you will see vibrant gemstones and spectacular masks as well as the name of the game in colourful lettering. Along with your common symbols like your playing card icons, players will also want to watch out for the wild and scatter symbols which unlock some of the games bonuses. During gameplay, you will see a special inventory that stores any of the special symbols you’ve gained during the game. These can then be slotted into place whenever you need them to land a bigger prize.

The wild symbol can appear on any reels and will stand in for any symbol in the game apart from the scatter. Expanding wilds are another feature of the game and they will randomly expand and change other symbols, creating bigger winning combinations. Random wilds will also occur and be delivered by the genie who will then turn any symbol into a wild. Stacked wilds appear on the reels and go up to three high.

Whenever the genie is activated he can throw random multipliers onto the reels for 2x or 3x your initial bet. Free spins can be activated when you land scatter symbols. When you do this you will automatically receive ten free spins and then move on to the bonus round.

The Wish Master has a bonus feature that is triggered if you land the scatter symbol depicting a lamp. When this bonus round is activated you will receive wishes which come in the forms of multipliers, bonuses, expanding wilds and lots of other prizes. The genie has the power to turn his reel into wilds, rewarding the player with the top payout of 900,000 coins.

Overall The Wish Master is very exciting and can offer up some pretty sizeable rewards. Players will surely enjoy the graphics as the atmosphere is alluring and exciting. While the slot may appear simple the bonuses add something to the gameplay that give it a unique edge over other slots. Free spins can be triggered regularly so you’re sure to win at least a small bonus prize, even if you’re on a limited budget for playing the game. The game is attractive to any player and once you start you may find it difficult to stop!