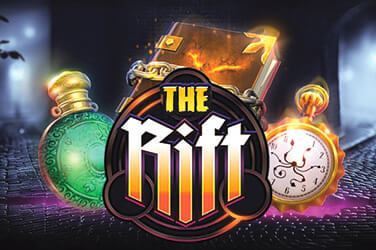 The Rift is a supernatural slot by Thunderkick, a Swedish development company founded in 2015 and partnered with NYX. The slot takes on the theme of time travel, with some super features packed in including sticky Wilds, re-spins, Free Spins, and more.

Read on to see if this Doctor Who meets Cthulhu fantasy slot is for you.

The Rift appears to be set in Victorian London, with cobbled stone streets seen in the background and a sinister pentagon symbol carved into the wall just behind the slots. There’s a deep rift that’s opened up in the ground, from which an ominous purple mist is emanating. It’s a unique looking slot which certainly does a good job of setting the scene for the features to come.

The Rift is a 17 payline slot which allows players to set their total bet from 10p to $100 per spin of the reels. Sets of three or more matching symbols payout, with the slot’s highest paying symbol being the mysterious burning book, which pays up to 30x the total bet for five symbols across a single payline. The game’s lower valued symbols are all coins, with bronze, silver and gold coins paying out between 3x and 6x the bet for five symbols on a payline.

There are plenty of features to look out for in The Rift. Three or more Bonus Scatter symbols anywhere on the reels trigger Free Spins, between 10 and 20 depending on how many Scatters players land. During Free Spins, every bonus symbol which lands on the reels lets the player advance one step on The Rift Seal, and every third step on this seal unlocks more free spins and new Sticky Wilds to add to the reels. On top of this, players can unlock Rift Spins by landing two bonus Scatters in the base game, where up to three Sticky Wilds are added to the reels for a bonus re-spin.

If you like to play on the go, don’t worry. The Rift plays across a range of devices including both iOS and Android tablets and smartphones, so spinning the reels while out and about shouldn’t be a problem.

The Rift offers an average return of 96.3%, which is just a little above average for a slot of this kind, and most players should find this acceptable enough. The Rift is also a medium to high volatility slot, so players should be aware before they play that wins in The Rift are usually bigger but less frequent than in lower volatility slots.

The Rift is a unique and memorable slot which boasts a theme which is a little different from the norm. The slot’s design does help The Rift to stand out from the crowd, and Thunderkick have done a great job of creating game mechanics which fit well with the slot’s theme. Give this one a spin if all things dark and sinister appeal to you.