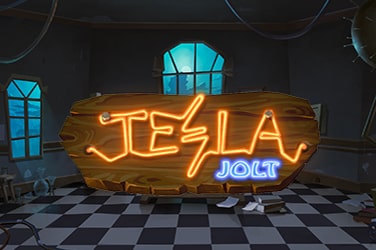 Today Tesla is known as one of the leading electric car companies, but before the days of Musk, the word Tesla comes from the world renowned revolutionary engineer, Nikola Tesla.

Taking from his name, NoLimit City has created this slot game, Tesla Jolt. In this review we’re going to explore how this developer has tried to capture this great man’s legacy. Does it live up to the hype? Keep reading and find out. Remember you can try this slot for free right here at CasinoNZ!

If you’re looking for an adventure, the Tesla Jolt slot is sure to reel in your interest. The standard 5×3 layout might be on display, but it doesn’t stick to any theming: there are 20 paylines and a whole lot more than that!

The Tesla game is full of familiar and unfamiliar symbols that will test your skills as a player. The reels on the new slot game are filled with old favourites like plugs, bulbs, wire coils, and battery chargers alongside cards from poker to jackpots to make it an exciting experience for all players.

The Tesla Jolt slot game has a 96.61% return to player percentage which is lower than the industry average, but it also features low volatility meaning on average, wins will be smaller but will be more frequent over long-term play.

Players will have a chance to play with stakes from $/€/£0.20 all the way up to the maximum stake of $/€/£100. You could also win up to 582x your initial stake if you decide to join in on this exciting and addictive game!

The sights and sounds of electric currents are ever-present in this game, with the design work playing along nicely. The electrical theme is one that’s both visually pleasing and somewhat educational among other themes throughout the world.

If you’re looking for a symbol that can stand in place of any and every other symbol, try the purple wild. It replaces all non-scatter symbols on your board outside of scatter which is Tesla himself! The Jolt feature works by landing one as it lands on reel 5 – then select at random another symbol to turn into a Wild too, making big wins more likely than ever before.

When you land on 3 scatters, you instantly trigger the Tesla Spins feature. When one of those wilds land in the middle row during your free spins and charges up a reel meter to create bigger winnings with Charged Wilds! If you can trigger Time-Lapse Trigger by landing it on 5th reels when any wild is present, discharging them for more wins as well as awarding another round of free spin rounds – that’ll make this game feel even crazier than before!

Tesla Jolt is a game that takes you on an electrifying adventure into the future. Inspired by Nikola Tesla, this slot machine will have players taking risks to gain some extra points and maybe even get lucky! The graphics in the background are dreamy yet cartoonish at once making for a visual experience like no other. And with bonus rounds galore, who knows what could happen?