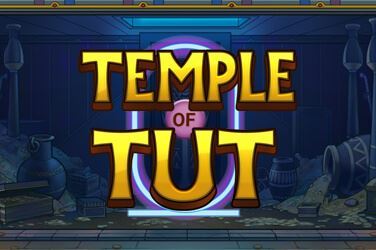 Since the first temples and statues began emerging into the light after thousands of years, studying the Egyptian civilizations and their lives have been something of an obsession. So no wonder we’re so keen to play pokies about them! Temple of Tut is the next in a long line of Egypt themed slots, and with the lure of gold and the potential for danger, it’s not hard to see why. But is this slot an undiscovered treasure or just some old junk? Let’s take a look at our Temple of Tut review.

Unlike some slots, which take a very literal approach to depicting Ancient Egypt, there’s something mystical about this game, which has a deep blue background in which tiny white hieroglyphs float mysteriously. The symbols themselves are pretty traditional by contrast. They include all the usual icons you’d expect, including the eagle of Isis, the Eye of Horus, the ankh, canopic jars and King Tut’s burial mask. On the other hand, the higher value symbols are a collection of adventurers braving danger, including an older man, a young man, and an asian woman with a torch. There is some appropriately grand-sounding Egyptian inspired music in the background and some cool looking modern animations and sound effects that bring the game to life.

The setup of Temple of Tut features three rows and five reels with ten payline, on which you can bet a nicely inflated figure of £/$/€250 per spin, which is more than in most games. The payouts in this game aren’t huge in the main, with a top prize of just 25x your stake, which is relatively common in games with significant betting limits. It means you have to bet big to win big, which makes sense! Therefore the overall RTP is only a hair above average at 96.01%, though this can be boosted significantly with a good run in the bonuses.

There are two bonuses available in the Temple of Tut slot game, one of which is random and one of which is activated via scatters. The first is the Super Reels system, which happens randomly during the base game and causes whole reels to turn completely wild, making it easier to generate fantastic combos. The second bonus is the free spins feature, activated by landing three or more scatters, which opens a hidden door behind the reels as you collect the scatters, which is a nice touch. In this feature, you can get up to 30 free spins by collecting five scatters, and thought the free spins round the Super Reels will be active, helping you to land even more wild combos. Even better, if free spins symbols land during the bonuses, you’ll also get even more extra spins, up to 30, meaning up to 60 free spins are possible!

Though the Ancient Egypt theme is a bit overused in pokies, Temple of Tut is an excellent example of the genre, bringing great visuals and some fun little bonuses to the table. We particularly like the free spins because you don’t often see as many as 60 in a slot these days!