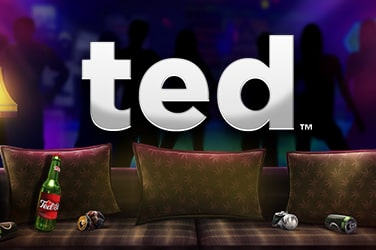 Ted is a slot by Blueprint Gaming and Nyx based on the Seth MacFarlane comedy film about a crude talking bear from 2012.

The slot features characters from the film, including Ted, who stands by the reels and makes wisecracks between spins. It’s a fun slot, and fans of the film will undoubtedly enjoy this homage to a modern comedy classic.

There are tons of special features in Ted – literally too many to go into them all in detail here. Three Thunder Buddies symbols trigger the Thunder Buddies bonus round, in which players will move up the ladder to unlock one of five different bonuses, including Ted Free Spins and The Wheel of Fortune. On top of this, Ted can also trigger one of six special bonuses randomly at any point in the game. These features include Lazer Gun Infectious Wilds, Psychedelic Super Spin, TV Streak, and Beer Shuffle. The sheer variety of bonus features in this game might prove a big draw for some players, although no doubt some will be put off by the simple fact that particular features – such as free spins – come around much less often.

Ted runs smoothly on mobile devices, including tablets and smartphones, so there should be no issues for players who like to game on the go. It loads quickly, looks great, and plays like a dream on iOS and Android devices.

Ted offers an average return to player of 95.80%, which is just a tiny bit below average but not much. This means that for every $100 players spend on the reels, they can hope to win back around $95.80, although many players will win more or less than this. It’s a medium variance slot, which means it’s reasonably well balanced for most play styles.

Casino NZ brings you the ever-popular Ted slot which is fun in its own right, although for most players the draw will be in the numerous references to the film made throughout the game. With tons of features and a decent RTP, this slot will likely appeal to casual players looking for something new, though serious players might dislike the variety of features, because it makes this slot harder to play strategically. All in all, Ted is a bit like the film it’s based on: fun, joyous, and absolute chaos.

If you love slots, we have lots of titles from Nyx including Flame, Queen of the Castle, Wai-Kai and Lightning Horseman.