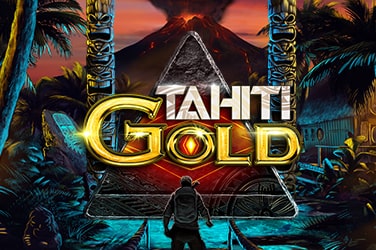 Tahiti Gold is a slot by ELK Studios, a young Swedish studio who have taken the slot world by storm since their inception in 2012.

Tahiti Gold is one of the company’s most played slots, and it’s not hard to see why: it’s a gorgeous adventure slot which takes players to the island of Tahiti to hunt for gold and treasure.

Tahiti Gold is a really fine looking slot. The reels are packed with brightly coloured symbols including tribal masks, red frogs, and green lizards, and the slot’s symbols are stacked like stone slabs between two totem poles. The reels are set deep in the Polynesian jungle, and a bright and upbeat native tune plays out overhead while players spin the reels.

Tahiti Gold is a ways to win slot offering 4096 ways to win, though this can be expanded during gameplay. To win, players must land matching symbols anywhere on adjacent reels from left to right. The slot’s most valuable symbol is the adventurer, who pays up to 3.5x the bet for six symbols on adjacent reels, while lower valued symbols including frog and fish engravings pay up to 0.7x the bet for six. Tahiti Gold also features the Avalanche game mechanic, which means that all symbols which are part of a winning spin explode and make space for new symbols to drop into their places. This means every spin, even during the base game, can prompt multiple wins, and it’s a fantastic feature to see.

Tahiti Gold offers both a Free Spins round and a bunch of features that can randomly trigger during the base game, too. First, Free Spins, which in this game are called Free Drops, trigger when three or more Bonus symbols land on the reels, unlocking 10 to 25 free drops. During free drops, all Wilds which land on the reels become sticky, and there’s a safety level which advances as players land wins, adding more reels to the slot and increasing the number of ways to win. This is a super fun Free Spins round and very much worth playing for. On top of that, randomly triggering features during the base game include colossal symbols of up to 4×4, Wild Forge symbols which fill empty spaces below with Wilds, and Eye of Tiki symbols which remove all the symbols between them and add an additional row of symbols at the top of the reels. This is one of those games that you really need to play to get a feel for just how much is going on.

Tahiti Gold’s return to player of 96.1% is decent. It’s about average for a modern online slot and certainly shouldn’t put any players off.

Tahiti Gold is a great online slot. It ticks every box: it looks great, it’s packed with features which make it feel unique and interesting, and its returns are decent. If you’re a fan of adventure slots like Book of Dead and Gonzo’s Quest, give Tahiti Gold a shot.