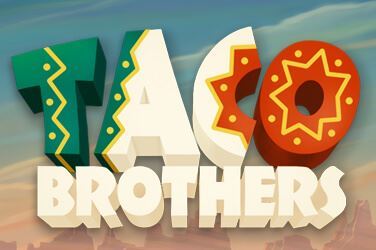 We all love a story where the forces of evil are defeated by plucky heroes, which is why we couldn’t wait to play Taco Brothers, a Mexican-themed slot about trying to rob a corrupt policeman. There’s something romantic about the banditos of Mexico defying the federal government and living their lives outside the law, and these three taco loving brothers are more adorable than most! So can you break the bank, steal the safe and make off with your riches? Or will you be eating your tacos in the slammer from now on? Let’s take a look in our Taco Brothers slot game review.

Taco Brothers is a fun, crime caper romp that manages to squeeze an awful lot of personality into the three brothers, even though the whole pokie is ripped straight from the big book of Mexican stereotypes. The background to the reels is a scene of a dusty Mexican town with a bank in the centre, and it’s obvious straight away that a lot of effort and time has gone into making the art in this slot look great. The low paying symbols are cactuses, lamps and shovels, bottles of Tequila and Spanish guitars, while the brothers are the high paying symbols. Fun little sound effects play in the background, including desert sounds and the ever present Mariachi band, which really helps to build the atmosphere.

The layout of the Taco Brothers slot game is traditional, with five reels and three rows, but you do get 243 pay lines to play on and a maximum bet of £/$/€50, so it’s not all that derivative after all. The payouts are also very good, with the cigar smoking brother paying the most at 400x your stake for five, though even the low paying symbols all grant 80x your stake for five, which is nothing to sniff at! The RTP of 96.3% is healthily above average, so you can be confident of winning some cash, but there are also a couple of other awesome bonuses on top to help make your day even better!

The first bonus is a simple one that is activated randomly in the main game, and when two of the game’s logo wilds land all of the reels that don’t already have a wild or scatter on them will re-spin once. The second bonus is the main one, and is activated by landing three safe scatters. Once that happens a bomb will fly at the screen and explode, blowing open the safes and granting you a random multiplier worth up to 3x. The brothers then drop onto the screen one by one and become walking wilds, hopping one reel to the left with each spin. Two extra symbols are also created, the policeman and a beautiful woman, and if the policeman lands on the same reel as one of the brothers then he is locked up and frozen in place, allowing the next brother to make a break for it. Conversely, the beautiful woman can distract the boys and force them back a reel, giving you more spins, while also letting them out of jail when she lands on their reel. The free spins keep coming until either all three brothers are in prison or have escaped.

Taco Brothers is a fun, funny slot that looks great and brings a lot of humour to the table, as well as some amazing bonuses and some great payouts. The free spins bonus especially is endless fun, and you’ll enjoy helping those three crazy desperados to freedom.