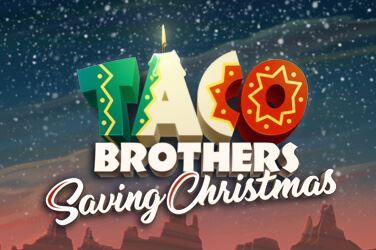 Players who remember the original Taco Brothers will find pretty early on that this is just a re-skinned version of that game, with Christmas themed symbols and backgrounds replacing the old ones, but new players will still find lots to enjoy. It tells the story of three brothers on the hunt for stolen gold in the Mexican desert, and the symbols include safe cracking and Mexican themed objects including cactuses, picks and lamps, tequila bottles, guitars and safes. The difference is that all of these now have a layer of snow, are wrapped in lights or have sprigs of holly attached. These are the lower value symbols, while the high value symbols are the three brothers themselves, playing guitars wearing Santa hats or holding crackers ready to pull.

Much like the original game, the Taco Brothers Saving Christmas slot game is laid out pretty traditionally. There are five reels and three rows to play on, though there are 243 pay lines on which you can bet a maximum of £/$/€50. The top payout in this game is 400x your wager, won by landing five of the brothers with the candy cane, while even the low value symbols pay 80x your wager for five. The overall RTP of 96.4% is nicely above average, so you can be confident of winning cash, but there are also some great bonuses on top to help you make even more!

The big feature that Taco Brothers Saving Christmas brings to the table is the free spins, which are a little more complicated than usual. Land three safe symbols and you’ll be given a random multiplier up to 3x by way of a bomb, and then the free spins begin, with each brother dropping onto the reels one spin at a time. These brothers then become walking wilds, moving one space to the right with each spin on their way to freedom. Two more new symbols are added to the screen with each spin, a policeman and a beautiful woman. If the policeman lands on the same reel as a brother then that brother is caught and frozen in place for the rest of the spins, while if the woman lands on the same reel as a brother then his symbol is distracted by her and moves back a reel so that you get more spins. The spins end when all the brothers escape or get caught.

Taco Brothers Saving Christmas is very similar to the original Taco Brothers apart from the Christmas theme, but if you never played the first one or would love more of the same, then this is the pokie for you. The style and theme is great looking and pretty funny, while the payouts are excellent and the bonuses interesting and fun enough to grab your attention.