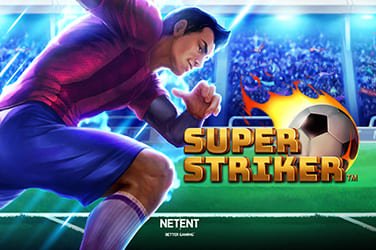 Love football? Love playing slot games? Why not combine those two passions and play NetEnt’s Super Striker slot? Read this review and see how you could score a goal in this title!

Perhaps unsurprisingly, given the game’s name, this Super Striker slot game from NetEnt is based on a theme of one of the world’s most popular sports: football/soccer.

Players will be met with a background that features a football pitch inside a packed stadium where they will see many well-designed visuals, thus allowing players to experience what it may be like to be the team’s star performer!

This Super Striker slot game has been made to be rather simple for players, as there are just three reels and three rows, leading to a total of 5 paylines being made available to form winning combinations.

Furthermore, the simplicity factor that the developer has gone for continues to be followed with the symbols available on the paytable of this game, as NetEnt has implemented several instantly recognisable icons.

Available symbols include football boots, footballs (Golden and regular), players, and the GOAL symbol – which comes in the form of 1, 2, or 3 being scored.

There is a couple of different Super Striker bonus features available to trigger in this NetEnt title that CasinoNZ players will enjoy!

Furthermore, players who can land three of these icons, regardless of the combination that is made – for example, one gold ball and two original balls – will be rewarded with three free spins.

Additionally, players will notice multipliers attached to the golden scatter icons, as each of these will randomly be assigned with a value of between x1 and x50. Should they be able to fill the entire grid, players will advance to the next level, where they will then have the opportunity to win an amount that is equal to the number of golden scatter multipliers x the level multiplier x the bet initially placed!

Lastly, another of the Super Striker bonus features available is via the bet slip found to the right of the playing screen. This can help players to win additional rewards as they can place bets on certain symbols appearing on the grid over a period of spins, with a range of odds being provided.

A minimum bet of just $/€/£0.10 is all that is required to see if a player can score in this game, whilst a maximum bet of $/€/£75 can also be placed when they take to the football field.

This Super Striker slot game also has a return to player (RTP) rate of 96.3%.

Lovers of the beautiful game will instantly fall in love with this Super Striker slot game from NetEnt as it combines one of their greatest loves with a simple yet rewarding gameplay experience and one that is highly enjoyable!

Indeed, scoring a goal has perhaps never been as rewarding!

If you like the Super Striker slot game, why not try Football Star or Football Cash Pots?!