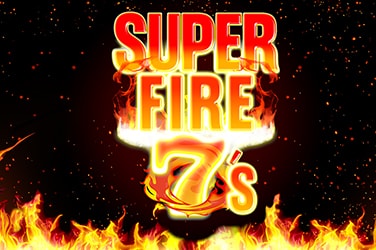 Super Fire 7s is a simple slot game styled in many ways after classic fruit slots. Symbols on the reels include watermelons, cherries, and grapes, and the slot’s gameplay is simple and fuss-free.

That doesn’t mean there’s nothing to watch out for, though; there’s still plenty of excitement in Super Fire 7s

Super Fire 7s is an interesting combo of old and new: the reels are filled with 2D fruit symbols including watermelons and plums, as well as bells and lucky 7s. There’s no getting away from the fact that this looks like a classic slot machine in many ways. And yet, behind the reels are flickering flames licking up the side of the slots – something which indicates this slot isn’t all that traditional, after all.

Super Fire 7s may look like an older slot but it was only released in 2018 and as such players will be happy to hear that it’s been optimised for mobile play across a range of devices. This includes both iOS and Android smartphones and tablets, so playing while on the go isn’t a problem.

It’s no secret that Super Fire 7s is a simple slot. If you’re here for contemporary slots that offer Free Spins, jackpots, pick and click games and more – you might be out of luck with this one. However, for players looking for classic slots that have more in common with slot machines of the 1980s and 90s than contemporary online slots, Super Fire 7s might be a good choice. The returns are good and the slot’s star Scatter adds an extra element of opportunity for players hoping for a windfall win.