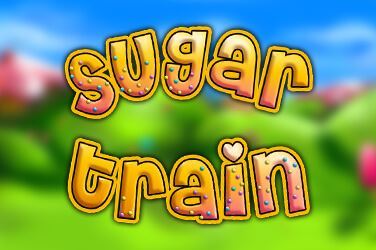 They say you should never shop while you’re hungry, but now you’re going to have to add pokies to your list of prohibited activities, because Sugar Train will certainly be a problem for anyone with a sweet tooth! Every last inch of this slot is dripping with sugar, from the landscape to the literal sweet treats sitting on the reels, and you’re going to be hard pressed to decide whether you want to spin the reels or eat them with this pokie. So it looks good enough to eat, but how does it pay? Let’s take a look in our Sugar Train slot game review.

Sugar Train certainly is a brightly coloured slot, and your eyes will be assaulted by a riot of reds, greens, blues and yellows right from the start. Sweeties are everywhere in this pokie, and even the world around the reels seems to be made of candy, including the lollipop trees and the pudding mountain that looms over the world. The symbols on the reels are all unique, and encompass just about every kind of candy there is, from rainbow lollipops all the way to muffins, donuts and chocolate bars. There’s no logic behind the value of each type of sweetie, and so you’re just going to have to learn the pay table, but suffice to say this slot has an extremely generous main game.

We usually don’t mention the prizes until it’s time to talk about the game’s mechanics, but Sugar Train’s prizes are so good that they deserve to be front and centre. There are basically no bad options in this game, and even the lowest paid five boiled sweets or cupcake symbols pay a whopping 800x your line bet, more than the jackpot in many games. This only gets better as you head on up the pay table, with the top payout doubling every time until you get to the walnut whip, which sits at an incredible 40,000x your line bet. This is a high volatility slot, so it’s a bit all or nothing with an RTP of just 95.07%, but if you do win you win seriously big!

Just like the best ice creams there is a sprinkle of bonuses on top of the Sugar Train slot game, some of which are random and some of which you have to work for. The Sugar Train makes an appearance in the gumball feature, chugging along the bottom of the reels as mechanical grabbers attempt to help themselves to sweets and win you a random bonus up to 500x your wager. A second feature is the rainbow scatter, which gives you the chance to pick from the symbols you landed when you get three of them in one spin, with a random prize awarded by your pick of up to 100x your wager. The main game is a free spins feature activated by the gold bear wild, and you get 25 free spins for five of them, though there are no extra bonuses. The gold bear does have an extra surprise in the main game however, doubling the value of any win it is part of as a wild!

Sugar Train may have a fluffy, silly look about it, but this exterior hides some truly amazing wins that nobody could turn their nose up at! And that’s just in the main game, while there is a bevvy of extra bonuses on top which can make you even richer if you spin well!

Do you just want to keep rolling on the slots? We suggest Raging Rhino Megaways, Flamin Elle, Respin Circus and The Da Vinci Device.