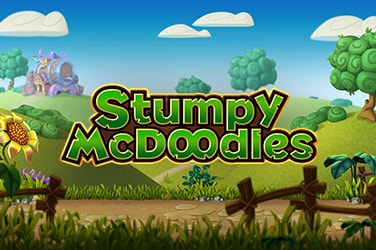 Stumpy McDoodles is a rather oddly titled slot by Foxium, an online casino developer launched in 2015 and responsible for some great games like 3 Tiny Gods and Boom Pirates.

Stumpy McDoodles is a great looking slot. The slot’s animated graphics are all bright 3D CGI, and the reels are set against a gorgeous green meadow with Stumpy’s cute barrel house visible in the background. It’s a sweet slot and one that wouldn’t look out of place next to similar Irish slots such as NetEnt’s Finn series.

Stumpy McDoodles is a busy little leprechaun. During the base game, there are a few features players should be keeping an eye out for, including Random Wilds, which can be dealt out onto the reels from a randomly appearing pot of gold, and Rainbow Respins, which trigger when only two Scatter symbols land on the reels and give players an extra chance to bag a third Scatter. Three Scatter symbols trigger Stumpy McDoodles’ Free Spins, which unlocks five free spins with a few extra bonuses included too. Players collect coins during Free Spins to unlock multipliers, Shifting Wilds, and additional Free Spins, and pots of gold can randomly appear to add more multipliers to the current Free Spins multiplier value. It’s a busy round with a lot going on, but it’s great fun and there are some excellent wins to be had.

The average return to player for players playing Stumpy McDoodles is 96.26%, which is around average compared to other contemporary slots. It means that players spending around $100 on the reels will win back around $96.26 on average. This figure shouldn’t scare players away nor should it sell the slot; it’s a good return.

Stumpy McDoodles is pretty good. It’s a fun slot with a lot going on, and Foxium has managed to work with the Irish theme to create something that feels unique and interesting, rather than another slot with clovers and pots of gold all over the reels. The Free Spins feature has a lot to it, and even during the base game, there’s plenty of fun to be had. Players who like slots like Finn and the Swirly Spin might want to give Stumpy McDoodles a chance.