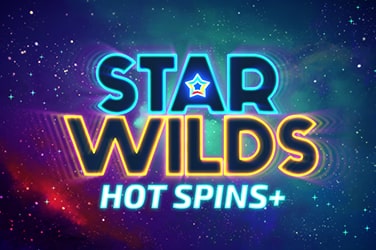 When you see such an interesting name like the Star Wilds Hot Spins+ slot game it piques your interest and makes you want to take a look at what the hype is all about just for curiosity’s sake alone- admit it!

The thing that got us interested in this particular slot was not only the unusual design but also its intriguing namesake. Once we started playing there wasn’t any surprise why this has become so popular with players everywhere: It’s fast paced yet easy enough even beginners can play without feeling intimidated by complicated buttons or flashy graphics; plus every spin offers something different from wild symbols and bonus rounds galore!

The name of the game here is unique. It has a futuristic, somewhat comic-book type of styling that we really do like! Sure it may not be everyone’s cup of tea but with such an unusual name you have to stand out amongst the pack.

The Star Wilds Hot Spins slot game is set in the deep embers of space, but one thing that remains constant about it are its standard 5×3 reel layout and 10 paylines. The retro vibe within this video machine echoes throughout with symbols such as stars, pentagons, triangles squares 7s more. Players can even access this slot game on their mobiles to enjoy it on the go!

We count down the list of essential qualities a slot machine should have, and it’s just not complete without RTP. Some players use this as an indicator for their own experience; we’re sure they’ll be using Star Wilds Hot Spins because at 95.93% in the base game is just around industry average but with medium volatility, punters won’t be surprised to see a run of smaller wins.

Players can adjust their betting range on this game, starting from as little as $/€/£0.10 and going up to a maximum stake of $/€/£100. The jackpot is a massive 2500x your stake which players will be aiming for.

The Wild symbol can replace any and all other normal symbols on the board, so if you’re feeling lucky then keep an eye out for it. The best feature of this slot is its Hot Spins mode which starts when a player wins 4x their initial stake. When activated, reels split off into four smaller sets of reels that players can continue to spin while taking more risk but also increasing winnings odds in the process as well! If you land Wilds during the spin, they will then stay on the reels until your Hot Spins feature concludes!

The Star Wilds Hot Spins slot game may be the most creative of name we have seen, and it offers a great deal in terms of gameplay. With bonus features galore and plenty to offer players looking for more than just straight wins, this is an easy recommendation.