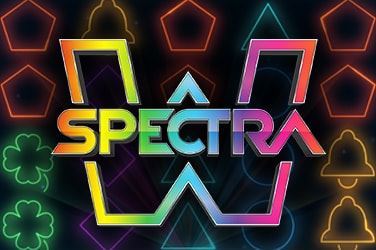 The Spectra slot game by Thunderkick is one of the many games that have been created. This particular slot game was released in 2016 and has a very unique approach to visuals, with reels merged into neon colours against black backgrounds. There are trendy electric soundtracks too! The best part about this newer release is that it can be played on all desktop as well as mobile and tablet devices for those looking for something out-of-the-box at home or while out traveling.

You can tell that Thunderkick has gone to great lengths to make this game as authentic and classic feeling as they could. The colours are vibrant, but not too vivid so you don’t lose the nostalgic feel in some of the more retro styled machines. There are also a huge 30 paylines in action to start working towards.

The bar pays the most out of these icons with a 10x payout should you land five in a row. There are also squares, diamonds, and pentagons at various neon colors that will give both small prizes while they act as an eye-catching style to Spectra’s interface.

With a very solid return to player of 96.40%, this game will give players good value for money when playing. RTPs are important as they can give a player a rough estimate of what they should return on their investment in a game.

Thunderkick, the company behind Spectra and a popular slots game developer in general, does not think that their latest release needs any fancy bonus features. They believe that simplicity is key to success with this particular title because there are already so many opportunities for players to win without them! Thunderkick knows what they’re doing by keeping it simple – as evidenced by the popularity of previous games which don’t have an excessive number of bonuses or free spin rounds.

The Wild symbol in Spectra is always a stack of four. That means, if you’re only seeing combinations of 1s or 2s for the wild, there’s more waiting just out-of-view. The “Wild Nudge” feature allows players to nudge the stacks up and down to get even more symbols onto reels!

The Wilds are out there waiting to be nudged, and when they do you get a free re-spin. During this re-spins you will gain more chance of creating combinations which is turn into higher rewards.

Spectra is a slot machine that has an impressive futuristic outlook. It features sharp sounds and striking visuals, which can captivate players quickly when they start playing the game. There’s also high variance to this slot machine despite its simplistic approach – making it perfect for those who enjoy some risk in their experience while playing slots!