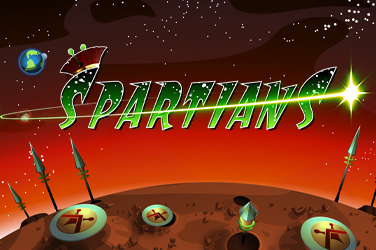 The ancient legends of Greek history come alive again as you play Spartians – Brave Bold Fearless Warriors who Live On Mars! These pint-sized little guys pack a ton of fun gameplay into their tiny bodies that offers amazing prizes if you can help them fight off humans and robots in this adventure slot game.

Spartians is a slot game that fuses two of the most well-worn slots tropes, ancient warriors and aggressive aliens. As you might expect from an Genii production, they’ve done this in a creative way never seen before! Genii are the same guys who have also given us other great slot games such as The European Roulette and Stones and Bones.

The design is cartoonish and stylish in equal measure, reminiscent of a low budget made for TV movie, expect to see a combination of swords and sandals as well as other weird and wonderful items helping you on your way.

Unfortunately the lower value symbols are still represented by generic J – A images, but this is more than made up for with a dramatic and creative background. The rocky planet as well as its surrounding space looks great, while the sci-fi soundtrack backs it all up nicely!

With a maximum bet of £/€/$25 per spin and an RTP of 96.1% this is a good solid choice especially when you consider some of the jackpots and bonuses on offer which we will go into in a bit more detail below.

Spartians don’t have the most elaborate or complicated bonus round but it’s extremely generous in its payouts. The first thing you’ll come across with this game are these wilds which look like little Spartians decked-out for war and armed to the teeth! They will complete your combo when they appear on screen as well reward you with cash bonuses – double height so that they take up two slots at a time (for greater chance of winning).

Landing three or more scatter symbols triggers a mini-feature called Spartian Army, which replaces the regular symbol with an army of Spartan warriors ready for battle. With this special power in play you will be able to earn up to 18 free spins and supercharge your wilds for even greater wins! In other words this means the wilds become triple height in reels two and four doubling any wins you have with them, granting you a 1000x multiplier when these symbols are matched with other winning symbols. This means that if your bet is high enough, it’s possible to win up to £/€/$25000!

Spartians is a fun and cleverly designed game, but players who are looking for big jackpots may be disappointed during the main round. This all changes in the bonus rounds where this games amazing wilds can rack up huge cash prizes with little difficulty!