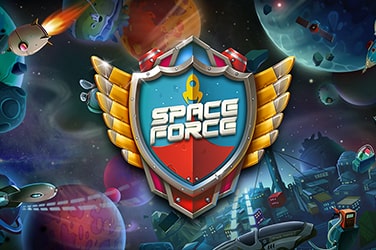 What goes up, must come down. You’ve probably heard this saying before and it might seem like a simple concept but space is also subject to gravity too! Ever wonder what the universe looks like from another planet or if there are other lifeforms out in outer-space? Introducing one of Gamevy’s newest slot games: Space Force. The game features an astronaut as its main character who sets off on adventure exploring different planets with two bonus rounds for you lucky players – so let’s take a look at the details below!

The Space Force slot game has a 3×7 reel layout with 7 paylines! The symbols are all related to the theming – astronauts, traffic jam, planet occupied by humans and aliens. After you have taken your first spin of this unusual video slot machine it becomes clear that there was never anything conventional about its design or gameplay.

The aesthetics of the game are impressive. It is easy to make out what’s going on which makes for a pleasant gaming experience. Players can enjoy Space Force on mobile devices which we know is important in this day and age.

The Space Force slot machine provides players with a 94% return to player percentage, which is below the industry average. But because this game has lower volatility than other slots games, you are more likely to win small prizes while trying to land the larger jackpots.

You can get started with only a lower amounts per spin or if you would like to stake more then there is a maximum stake of $/€/£70. Players of Space Force have the potential to take home up to $/€/£250k in winnings!

Space Force has no wild symbol in the game; however, the Space Force logo makes up for it by being the scatter along side the Planet Jackpot logo. These symbols make it easier to create combos and reward players.

The Free Spins bonus feature is triggered when 3 or more Space Force logo icons are in a row on a reel. This will result in the player receiving between 2 and 20 free spins – this is at random so is a real test of your luck.

The main Bonus Game is the reward for landing three Planet Jackpot symbols in a row. The wheel will determine which of five cash rewards you’ll receive: Gas Giant, Supernova, Red Dwarf, Comet or Asteroid.

You need to tell your friends about the Space Force slot game! It has a few hidden gems in the game play and bonus rounds as well as giving players a very engaging experience from outer space. Why not grab one of our new player promotions and get yourself started today?!