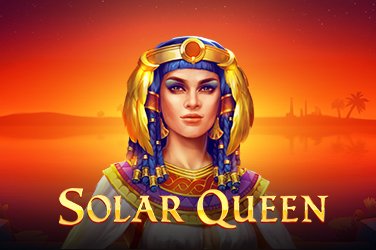 Taking it all the way back to Ancient Egypt can so often be viewed as an easy way out for slot providers, if only because it’s such a popular theme to use. When it’s done right, though, it can make for quite the experience.

Today, we’re going to take a look at Playson’s Solar Queen slot game to see what sort of end product fans have been left with.

The Solar Queen slot game, and the name itself, is another term gifted to Cleopatra – which sticks in line with the theming quite nicely. The layout on the reels is 5×4 which gives the symbols in question lots of room to breathe, and with 20 paylines to speak of, there’s a lot to get through in the base game alone.

The standard playcard symbols make an appearance on the reels alongside a few more themed efforts such as a handful of animals, Bastet, Anubis, the Solar Queen and so much more.

The return to player (RTP) percentage is always going to be integral to some out there who use it as a guiding light in their slot journey, and many will feel the same when using it for the Solar Queen slot game, with its reported RTP coming in at between 95.78% and 96%. That’s below the standard industry average regardless of which way you look at it, but with high volatility, it seems as if the potential reward could well be worth the wait.

It only takes 20p to get started with this slot as a minimum stake with the maximum riding all the way up to a nice figure of £100. From there, with the help of some multipliers, you could win up to 2,668x your stake – so it’s worth being patient.

There’s nothing particularly unique that Solar Queen does to try and reinvent the Ancient Egypt genre, and between the soundtrack and design work, it’s all fairly paint by numbers. With that being said, we think playing it safe is probably the right way to go with something so established.

The wild symbol can replace all other symbols outside of the scatter, and if you find three of more of the scatters on the 1st, 3rd and 5th reels, you’ll be able to unlock the Free Spins feature. From there you’ll get 10 free spins and when the sun symbol lands during the free spins, it’ll be transformed into a wild. Plus, if you have a multiplier from the Flaming Frames feature, it’ll be carried through to the free spins.

The Flaming Frames feature is active during the base game and involves 10 spin cycles. Every sun symbol on the reel triggers a Flaming Frame, and on the 10th spin, these Flaming Flames turn into wilds – with your multiplier increasing by 1x every time one lands.

The Solar Queen slot game isn’t about to blow you away by any stretch of the imagination but the story is easy to follow, the gameplay is smooth enough, there are a few fun bonus features are there are actually some decent potential winnings on the table.