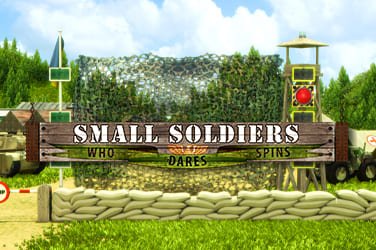 You might think that we’re talking about the 1998 movie here, but you would be wrong. Small Soldiers is actually a slot game starring cute little warriors with access to all kinds of dangerous-looking firepower and modern military bases in which they live!

With a ton of small, but excellent mini-games and some top drawer prizes awaited for you at the end. This game is tons of fun to play! But is it worth your time? Let’s find out in this Small Soldiers slot review.

This slot game has been developed by Genii who have also developed other popular slot games such as 7 Chakras and Atlantic City Blackjack.

Small Soldiers presents you with a military base in the background and tents, as well as a handful of officers. The low-value symbols are your normal J – K icons paired with dog tags and grenades while the higher paying symbols consist of tanks, planes, helicopters and medics. The whole thing could look rather grim, except that the characters are so cute looking like little video game avatars with big eyes. The contrast of their adorable appearance against a dark background is what makes this design work. The sound of a military band playing provides an exhilarating background to the game, while gun sounds and drill sergeant’s angry voice will keep you on your toes. These little games use 3D graphics that make it hard not to forget this is just another slot machine!

Small Soldiers is an exciting slot game with 40 different pay lines. The maximum bet per spin is only £/€/$50, but the top win of 6,000x your wager could happen if you hit five Officers symbols on a single line! The Officer, Artillerist and Medic all play over 1000x your wager for five on a line so there are plenty of high paying chances. Just remember that the bonus rounds can be tricky to trigger so you are going to be doing most of your playing in the main game. The game has an RTP of 96% and is seen as middle of the road when it comes to volatility.

The game has three awesome features. The wild, the free spins and the artillery. Five pilot scatters will win you 12 free spins, and that’s not all! You’ll also get a 4x multiplier on any wins made when the scatter symbol appears. The artillery game will put you through basic training, challenging you to shoot down three targets each round of play. Each target grants random cash prizes so try not to miss out on getting rich quick or washout before this exciting challenge is over! Keep your cool as you take aim at the targets and shoot them down! You’re in for a wild ride, with high stakes.

You’ll love how varied Small Soldiers is! There are a lot of features, and they vary greatly, payouts can be good for all levels of players, and the betting options are different than what you typically see in slots. If you like slot games with diverse gameplay, then this game will suit your needs perfectly.

If you want to try something new like Lucky Leprechaun, Dragon Spins, Wild Toro and Robin Hood and His Merry Wins.