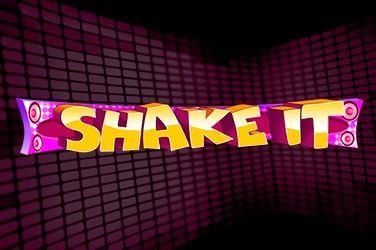 Shake It is a cheeky slot game produced by Fugaso and has had some rave reviews since being released in 2017. We are going to explore deeper into the game to see if the bonus features and RTP live up to the reviews we have seen.

Twerk your way to the bank with Shake It Slot! The game is based on a theme that you don’t see too often- twerking booties of all shapes, colours and sizes. Don’t be fooled by the quaint cobbled street in the backdrop when opening this slot; soon enough you’ll find yourself transported to an underground club complete with neon strobe lights and scantily clad pole dancers dancing around each side of these reels.

In terms of symbols there isn’t anything left out here: seven different booties in various positions wearing very colourful underwear are featured alongside our aptly named ‘move your ass symbol’.

The slot features five reels, three rows and ten winning ways with winnings both ways on the gaming mechanism. You can enjoy this game from any device – whether it be your laptop, desktop or mobile.

The return to player rate is set a solid 94.69% which means that if the average player staked $/€/£100 then they could expect to return $/€/£94.69. The game is class as being medium volatility which means that players can expect fairly frequent wins with the chance of landing some bigger wins.

In the Shake It Slot Game, you can win from left to right and also from right to left. With a dual-sided pay line bonus feature that helps boost your chances of winning prizes, this game is one for all levels.

The ‘move your ass’ symbol is a wild card. It can appear on just the second, third and fourth reels acting as a wild substituting for all other symbols on the reels. The reel will also transform into an entirely Wild Reel if one appears turning three spin opportunities into four! Most importantly though this same feature applies to when you get two or more of these in sequence first appearing anywhere from 2nd-4th slot without exception but not always at each position within that range – triggering free spins with multipliers up to 3x.

This slot game has a very unique theme that isn’t seen often in the world of online slots. The scantily clad ladies throughout gameplay is fun and cheeky, which we think will appeal to many players. We loved the win both ways gaming engine that can help increase your winning potential with expanding wilds!