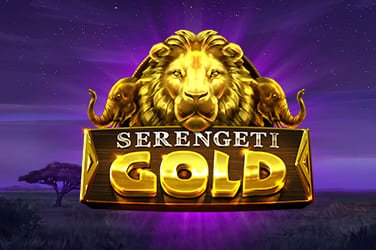 This African themed slot release by JustForTheWin jets players off to Tanzania, a fresh game setting here with previous ‘gold’ games based on Irish luck and the Wild West.

Behind the reels a typical scene of the African savannah can be seen with a large stretch of flatland including the odd Acacia tree here and there and mountains can be seen in the distance. The blue sky down to the ground below is covered in a haze that makes it appear slightly grey, the whole scene has been created nicely to look realistic. The game’s title is situated in the top-left of the screen above the Mega, Major and Mini jackpot indicators, the font used is bold, yet plain for ‘Serengeti’ and bright gold and large for ‘Gold’. The spin button is situated to the right of the gird along with the change stake and information feature presented in golden circles.

The grid itself consists of some interesting symbols, the lower-case J – A Royals appear in various colours, and the remaining 5 main game symbols are animals one would expect to see roaming the great plains. The buffalo, rhino, leopard and elephant symbols show the animals in different positions and colours, these can pay out between 7.5x and 20x the stake for a combination of 5. The king of the wild, the lion actually represents this game’s Wild symbol, these are worth the same as the elephant symbol and can represent other symbols to complete a winning line.

The golden disc symbols each have a value printed on top, if 6 of these appear on the reels from the same spin the Hyperhold Respins. The bonus golden discs that triggered this feature remain in positions and only other bonus symbols or blank spaces will appear during this round. If another bonus symbol lands it also sticks and resets the 3 respins, the prizes available from bonus symbols are usually worth 1x to 20x the stake. Bonus symbols can also pay 30x the bet (Mini Jackpot) or 100x the stake (Major Jackpot), if all 15 positions are filled with bonus symbols the Mega Jackpot of 2,500x is won.

JustForTheWin has really released something great here, the simplicity of the visual features only complements the brilliant game mechanics. The possible wins bring excitement to the game and bonus games make up for a fairly uninspired main game.

Check out our slots page for even more popular games including Starmania and Twin Happiness.