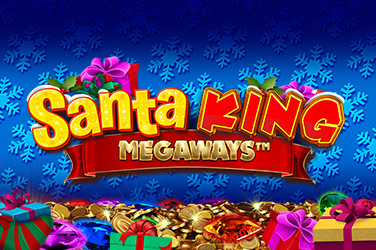 No matter what time of year it is it’s never the wrong time for a visit from Santa Claus, but look a little closer and you’ll notice that this isn’t your regular Santa. Santa King Megaways marks yet another appearance by Inspired Gaming’s King, who has been the star of a few of that developer’s games before, recognisable thanks to the little crown over his Santa hat. So if he’s Santa then he must be a jolly old soul, and if he’s a king he must be rich, which is a good combination. But will you be the recipient of one of his gifts, or will there be coal in your stocking? Let’s take a look in our Santa King Megaways slot game review.

As you might expect from the title, Santa King Megaways is a very Christmassy pokie, and all the decorations are themed around that. There’s an ice blue background covered in snowflakes and everything is dusted with snow or covered in holly sprigs. The symbols on the reels are a little less festive, and include all of your favourite fruit machine symbols, while the low value symbols are the standard 9 – A. There are also a couple of special symbols, like a sack of presents.

The most obvious feature this pokie brings to the table is Megaways, it’s right there in the title, and what this basically means is that the number of rows is different on each spin and even each reel. You can have anything from 243 ways to win to a vast 117,649 ways to win from one spin to the next, and even the spins with fewer ways to win often come with giant symbols instead. The positives of this are obvious, with so many ways to win that it’s harder to lose, though the downside is that your chance of success is often determined by this random factor. The betting limit is also pretty low at £/$/€20, in common with most Megaways slots. The result of this is that the RTP is below average at 96.56%, though this disadvantage soon disappears if you hit some big wins, so you might not even notice. Santa King Megaways is a cascading reels game, so winning combinations are removed to be replaced by new symbols falling from above, allowing you to set off a cascade of wins.

This cascading reels feature is key to one of the bonuses in Santa King Megaways, because each successful cascade in a row will light up one of the six reels, and when all the reels are lit you get to play the Reel King bonus. The least amount of cascades to activate this feature is six in a row, but if you get seven or eight in a row you can advance to an enhanced version of this game.

A tiny King with his own little one line slot appears over each reel, and spins little present symbols that win up to 10x your stake, or little yellow symbols that move you up the free spins trail at the top of the screen. Landing a losing spin causes that king to disappear, and the feature continues until you run out of Kings. If you activated the feature with eight cascades you can have up to six Kings, with which you can win up to 25 free spins. You can then choose to gamble your spins at double or nothing, or play them out, in a free spins game where you get an extra 1x multiplier for each cascade in a row you get.

Phew! The Santa King Megaways slot game is as bulging with gifts as Santa’s sack, whether it’s the megaways mechanic or the complex but generous bonus round. One thing we can guarantee is that you’ll have fun, and you may even walk away rich!