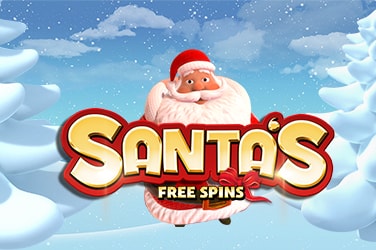 They say that Santa only comes but once a year, but thanks to those game developers at Inspired Gaming, Santa can pay you a visit any time of the year.

Inspired Gaming have been producing top quality online slot games since 2001, and with Santa Free Spins, every day can feel like Christmas day.

Helping to get you into the Christmas spirit, the five reels are set to a background of crisp white snow, and on the reels, you will find a number of different symbols that you would expect to find in a Christmas themed game. These include Santa on his sleigh, bells, gift-wrapped presents, a sack filled to the brim with presents, a star and a bauble to name but a few, whilst the game’s logo is the top paying symbol on the base game, with just two giving you a payout.

Santa himself acts as the wild symbol and landing one or more on a payline will see him substitute for all other symbols to form a winning combination. The Return to Player on this game comes in at the industry-standard 95%, whilst the minimum stake is 5c per line up to a maximum of $12.50 and the five reels offer 20 paylines, giving a jackpot on the base game of 500 coins.

The game’s logo will take you to the free spins feature should you get three or more on a payline, with the number of free spins received being dependant on how many symbols you landed to trigger the round. However, you can expect to receive between eight and 18 free spins, and during this round the game’s logo will become a stacked icon and will land more often, giving the chance of even more free spins. You will also receive a payout for landing two to five Santa’s Free Spins logo on top of the free spins, with five giving you the jackpot of 500x your unit stake, which is also known as the ‘Big Win’ feature.

This game includes the Giftus Maximus bonus where giant symbols of 3×3 size dominate reels one to three, increasing the likelihood of multiple winning combos.

The Special Fortune Bet feature is an option a player can take prior to spinning the reels and will take the maximum bet as high as $250 when activated. This option also includes doubling the size of the free spins symbol as well as doubling the chances of the Santa wild symbol appearing on the reels to form a winning combination.

If you love Christmas themed slots games, you will love this game, as the developers at Inspired Gaming have come up with a game that is engaging and pays out some large sums of money, even on the base game. This is the perfect festive online slot game that can be played throughout the year, so you don’t have to wait until December to get into the Christmas spirit.

Do you want to play a gift of a slot? Then you might like Magic 500, Blown Away, Dragon Ways Multiplier and Golden 7’s.