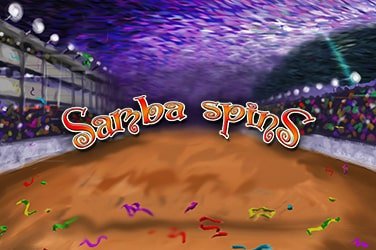 Want to go to the Rio de Janeiro carnival but are unable to? Then Genii’s Samba Spins slot game has got you covered, as this magical festival comes to life through your screen, whilst it can also be rather rewarding!

This Samba Spins slot game will instantly have players in a celebratory mood as they will be able to immediately feel the magic that Samba can provide in their lives.

The game has been designed exceptionally well and consists of some rather breathtaking visuals, with vibrant colours all over the screen!

Samba Spins takes place in the middle of a show event, as there are spectators to the sides of the grid whilst you can tell that a party is taking place with various colourful confetti having been drawn coming away from the playing grid!

Genii has continued to make the games they produce rather simple, and this Samba Spins slot continues to follow that trend.

Gamers will see that whilst the playing grid has been designed with many wonderful themes, objects, and animals, it still follows a standard formation of 5 reels and 3 rows. However, they have also included a mega 50 paylines to play and win from!

Naturally, the symbols on the paytable match the theme and the Samba celebrations perfectly. They also remain incredibly bright and vibrant in colour, thus adding to the overall themes that have been applied.

The symbols on the paytable include traditional royal playing cards, as well as a whistle, a drum, maracas, an orate mask, and carnival symbols, the latter paying up to 8,000x the bet when five appear!

A range of different Samba Spins bonus features have been made available in this game, with some in the base game and some coming via special icons that trigger new bonuses.

The expanding wilds feature is triggered when Carnival King and Queen appear on the reels. They will expand with confetti and fill the reels to form potential winning sequences. The wilds will only appear on reels 2 and 4 and replace regular paying icons.

The firework icon is the scatter icon for this game and will trigger the free spins Samba Spins bonus feature when 3 or more appear on the playing grid in a single spin. Additionally, they will also award a prize of 10x, 40x, or 100x the bet, too!

Land 3 of these icons, and you will be awarded 10 free spins, although 4 or 5 symbols will award 15 and 20 free spins, respectively!

This Samba Spins slot game from Genii has a reasonable return to player (RTP) rate, as it has been set at 95%, with a medium to high volatility.

If you want to enjoy the Rio de Janeiro carnival in the best way possible without actually being there, then this Samba Spins slot game is perhaps the best way to do so!

Gamers will find that they can win some potentially lucrative rewards, whilst aesthetically, they will feel that they have been in Brazil and celebrating with the Carnival King and Queen in person!

If you like the Samba Spins slot game, why not try Cup Carnaval Jackpot or Carnaval?