Home » Genii » Roll Up Roll Up 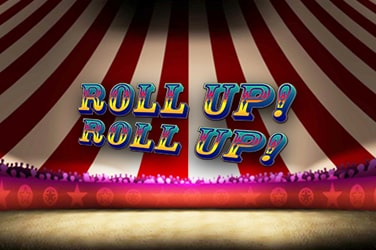 Roll Up Roll Up is slot game brought to us by Saucify, it includes everything you would expect to see from a day out at the circus, but will you be having the last laugh after playing this game? Read our full review below.

Roll Up Roll Up is housed on a pretty standard 5X3 playboard featuring all your favourite circus animals and symbols, from performing monkeys to seals. The game also includes some other symbols such as refreshments and ticket stubs for you enjoyment! This game uses coins rather than cash with a minimum bet of 1 coin and maximum of 90 so remember to keep this in mind.

Visually speaking, Roll Up Roll Up is a decent concept that could be even better if the renderings were of an elevated quality. I’m not saying they are badly crafted; we’re just spoiled these days and high-end graphics should really be expected as standard at this point in time. The soundtrack, though has a very nostalgic feel to it and can transport you right back to your childhood when you were visiting the circus.

The Roll Up, Roll Up game is equipped with a decent RTP of 96%, what this means is that the game would typically give you back £/€/$96 for every £/€/$100 wagered. This is an important factor when deciding on which slot games to play as depending on whether you are an adventurer or more risk averse this will steer you in the direction of games based on their RTP.

Roll Up Roll Up has the standard nine paylines and thanks to it’s decent RTP (described above) you can be fairly confident when trying to line up the symbols. The smaller prizes are gained by lining up the popcorn and ticket stub symbols while the biggest wins come from the lion tamers, tigers and elephants.

Roll Up Roll Up has a great free spins feature that can provide you with 40 free rounds if five scatter symbols show up in one spin. Another great bonus is the Balloon pop side game in which you are shown a clown who is being propped up by several balloons. The game is simple pick a balloon to pop and whatever prize is revealed is yours, be sure to pick wisely!

Roll Up is a slot game with an old school charm that should be popular amongst players thanks to its fun, throwback concept. The visuals are simple but still very attractive and the gameplay itself is easy enough. There is a nostalgic soundtrack that combines with the theme very well and the bonuses on offer with a decent RTP mean there is plenty of opportunity for winnings, so all in all we would recommend this one.