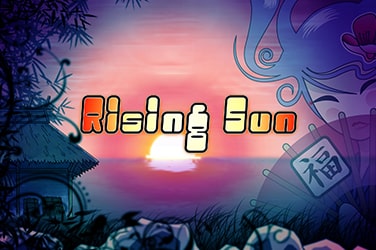 The Rising Sun slot is themed around everything to do with Japan and the customs they celebrate. Players can enjoy a very authentic looking, Japanese style of gameplay that pays homage to all things from their homeland.

With its rich, beautiful Japanese landscape and iconic 5×3 layout reminiscent of classic games from the past, Rising Sun is a game that will appeal to both new players looking for an introduction into this style of gameplay as well as experienced veterans who are seeking out something to get stuck into. The playing symbols also carry the far east theme some of these include, dragons, sushi and koi carp, they are fairly stereotypical things we think of if someone mentions Japan but they do help play into the theme.

It takes a lot of work to get the visuals and audio just right, but the developers of this game have nailed it It’s easy for Japanese concepts to be overlooked, but they’ve done everything possible in their power not only make it more immersive by including beautiful backgrounds that inhabit every moment of gameplay; but also making sure that each individual rendering is alive without being grotesque or too detailed.

The paylines you can play on depend on your budget, but we recommend playing with 20 for the best value. To win a prize, three of one symbol need to appear in succession anywhere across the payline, there are bigger prizes to be won though if you manage to match five! The multipliers in the game are large on first impression, but it is worth noting that you will be using a coin currency format rather than straight-up cash. This means your wins may not seem as big at they appear; however there is plenty of depth with regard to prizes.

Rising Sun’s RTP is currently unknown. This may be part of the game’s charm but it might also put some people off. It does however, have a low volatility, so you should feel okay with this knowledge but we recommend playing with caution to start with and seeing where that takes you.

The lucky cats symbol can land you up to 20 free spins if five show up in one spin. There are also 10 and 15 free spins available for players that get three or four of these symbols. The koi carp scatter symbol adds multipliers on top of your winnings, while the lady-with-a-fan symbol is wild which means it will substitute all other symbols in order to produce more winning combinations.

The Rising Sun slot game seems like a perfect blend of modern-day Japan and ancient Japanese culture. The balance between the features means that gameplay is exciting without getting stale, we would like to see more to the bonuses that just free spins but despite this small flaw, it’s worth giving them a spin!