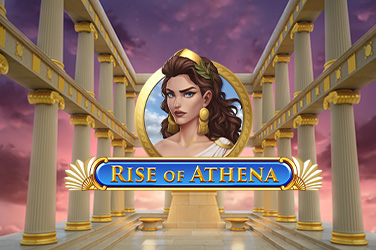 Brought to you by Play ‘n’ Go, the Rise of Athena Slot Game has five reels, three rows and ten paylines, with the chance to win up to 5,000 times your stake with every spin. The game’s design is compatible across all laptops, desktop PCs, touchscreen tablets and smartphones as it’s fully optimised.

With a Return to Player (RTP) of 96.20%, the Rise of Athena Slot Game is considered a medium volatility game.

Based on the Greek goddess with a strong mythology theme, the Rise of Athena Slot Game boasts high-quality graphics throughout. The backdrop comprises a traditional Greek temple, set high above Mount Olympus. The reels are bordered by a metallic gold design, and the accompanying soundtrack further adds to the overall excitement and atmosphere.

In terms of the game’s symbols, you’ll find the usual set of low-paying playing card royals – 10, J, Q, K and A – alongside ancient scrolls, warrior helmets, amphoras, the Pegasus horse and Athena herself. She is the most rewarding, offering prizes worth up to 150 times your stake if you land a full house of five across any payline.

The Rise of Athena Slot Game’s minimum bet sits at $/€/£0.10 per spin, with the highest possible wager limited to $/€/£100.00. Though not the most generous upper bet limit we’ve seen, it still leaves the game open to both low and high rollers.

The Rise of Athena Slot Game is an unusual slot that can seem quite complicated but offers a lot of chances to land significant wins thanks to the multiplier wilds. The key is to land multiple wilds simultaneously that can combine to boost your prize pot with 27 times multipliers.

The number of slots at Casino NZ is rising all the time. With great titles such as Contact, Crazy Cows, Leprechaun Goes Egypt and Mission Cash.