Riches of Midgard: Land and Expand 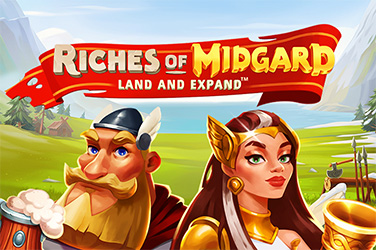 Riches of Midgard: Land and Expand is a fantastical slot game that pays homage to the mythical kingdom. While there are plenty of games around this concept, NetEnt’s version offers something different for those who want no-frills gameplay and less bells and whistles. Let’s look at what makes it tick along with some numbers in our Riches of Midgard review!

NetEnt has always been known as one to create more traditional slots without many frills or additions — their other popular releases such as Starburst, is just another excellent example. Play Riches of Midgard right here, for free, at CasinoNZ.

Riches of Midgard: Land and Expand is a new game that plays out on your standard 3×3 playboard, complete with cards from all four suits and medieval figures like the Knight. The most coveted card in Riches of Midgard? With a 435x multiplier for those who can build it up to cover their entire board at once, this one-of-a-kind treasure brings some class into what may otherwise be an ordinary slot game.

Visually speaking, you’re likely to be in one of two camps. You may enjoy the simplicity and minimalism that this layout provides or find it too simple for your taste. The game is still immersive despite its lack of graphics and animations though which can make up as much volume as possible with sound effects like spinning gears when playing a round on their current design-wise limited version. The game’s sound effects, and music are a fitting addition to its medieval theme, but it is the click noise that accompanies each turn which really brings the atmosphere you want.

Bonuses can be picked up along the way by matching three Scatter sledgehammers that offer a varying volume of free spins, with the potential to top yourself up with even more free spins and the addition of extra rows on your playboard to further maximise your returns.

Return to player rates are always seen as important to players. It’s simple, bettors want to play slots with high RTP rates so they can play for longer and have a better chance at winning. Riches of Midgard: Land and Expand has a fantastic return to player percentage of 96%, meaning this will be an attractive slot to the masses. It’s also classed as a low-medium variance slot, meaning wins will be nice and spread out.

Riches of Midgard is a slot game that isn’t going to set the world alight when it comes to stunning visuals but offers low volatility and solid return to player (RTP) rate. Riches of Midgard also has some form of uniqueness in its ability for players to purchase features with their balance. The gameplay itself can be easy-to-follow and has plenty of engaging aspects as well which will keep you spinning throughout!