Home » Playngo » Rich Wilde and the Tome of Madness

Rich Wilde and the Tome of Madness Slot Game Review 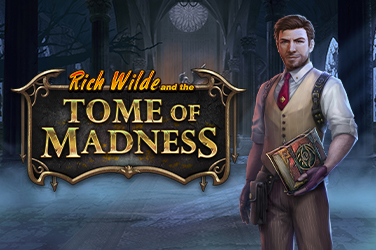 Fans of HP Lovecraft will be enthralled by Play ‘N GO’s Rich Wilde and the Tome of Madness. Set in the Cthulhu Mythos fictional universe, this cascading slot allows players to enjoy continuous wins from every drop and spin.

It’s suitable for low-stakes players and high rollers alike, as the reels can be spun from as little as 10p up to a maximum of $/€/£100.

On Rich Wilde and the Tome of Madness, winnings are formed by matching 4 or more symbols, either horizontally or vertically. When landing a win, contributing symbols disappear and are replaced with cascading symbols which can trigger continuous wins. Symbols include 4 colour stones alongside rings, skulls, octopus pendants and daggers. The octopus is the symbol to play for, as a cluster of 10 or more will reward you with 10 times your initial stake.

Play ‘n GO has included several wilds to help you to gain extra winnings. There’s the standard wild (the book of madness), and the special wild (the Necronomicon). Rich Wilde serves as the multiplier wild which replaces symbols and doubles your outcome.

It’s worth looking out for ‘Eye Marks’, these special positions appear randomly, and when you land a winner in these positions, 2 special wilds will be placed on the grid during the following winless cascade.

Achieving a win with a special wild will trigger the Abyss Portal Effect special feature. This removes a row or column from the winning special wild, which helps to further charge the portal. Winning with 27 symbols triggers the Void Portal Effect feature, which allows for even more symbols to fall into vacated spaces for further wins.

As a progressive developer, Play ‘N GO ensures that each of its titles is just as enjoyable on mobile phones as they are on desktop devices. Regardless of whether you’re rocking an iOS or Android smartphone, you’ll be able to access Rich Wilde and the Tome of Madness alongside the rest of Play ‘N GO’s large catalogue of games.

Rich Wilde and the Tome of Madness is classed as a high volatility slot. This means that there are greater chances to scoop large prizes but also a greater risk of losing your stake. The RTP is set at 94.52%, which is below average for a slot of this type. Those who want more longevity from their slots title may want to look elsewhere, although players willing to take a risk will love the excitement on offer.

Rich Wilde and the Tome of Madness can appear complicated to new players, but in truth, it’s an incredibly fun title once you figure out how the special features and bonus rounds are triggered. Once you’ve figured out how to make those reels cascade, you’ll find that this is an incredibly rewarding title that will keep you returning in the hopes of winning big.