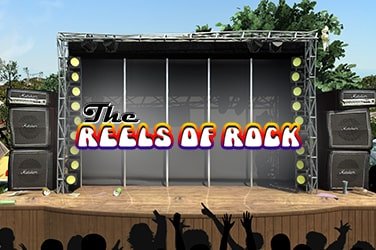 It is time to rock out with this Reels of Rock slot game from Genii, as players can trigger some awesome prizes as they enjoy the rock group’s performance!

Unsurprisingly, this Reels of Rock slot game features a rock music-heavy theme, as players will find that they will feel that they are at a concert and rocking out to their favourite group.

Much of this is possible due to Geni’s fantastic graphics and visual design, each being rather brilliant. Gamers are on the main stage at this concert, where they will see the headline act!

A playing grid of 5 reels and 3 rows have been provided for this Reels of Rock slot, with players also able to find 9 paylines available, with each of these adjustable.

Additionally, the symbols that feature on the grid are brilliantly drawn, as each of these brings the rock music concert theme to life.

Several Reels of Rock bonus features are available to trigger in this online slot, each providing players with potentially huge wins when activated.

A wild icon is available in this game, with many suggesting he looks a little like Jimi Hendrix. This icon – who is actually named Jimmy Plectrum – will help to form additional wins as he can substitute for all regular icons on the grid.

One of the biggest Reels of Rock bonus features, though, is that two different scatter icons are available to land.

One of the Reels of Rock bonus features available to activate is the ‘Free Spins’ game, although players will need to find 3 or more of the Vicious Tim symbols that can appear. If they do this, a minimum of 10 free spins can be won, although 20 and 40 free spins can also be obtained if 4 or 5 scatters appear on a single spin! Additionally, each win that is achieved in this game will be tripled!

The other scatter icon is the tour bus, which will trigger the ‘Reel Rockin Tour’ Reels of Rock bonus feature!

Players who land these icons on reels 1, 3, and 5 will enter ‘Joe’s Bar’ and see the band members come together to form a ‘Super Group’. Once this game begins, you must select three of the notes and win a prize from each of those chosen!

The return to player (RTP) rate for this Reels of Rock slot game is around 91%.

Reels of Rock slot by Genii is a fun and highly enjoyable game that can be extremely rewarding! The plethora of bonus features certainly help to make this game as enjoyable as a rock concert. Players will want to be head-banging as soon as they can land the big wins that are potentially available!

If you like the Reels of Rock slot game, why not try Reelin’ & Rockin’ or Punk Rocker?