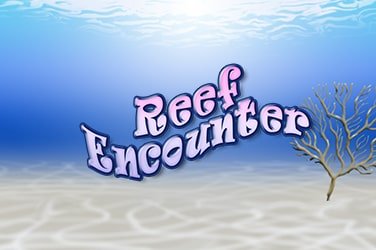 If you are a fan of “Finding Nemo”, then you will instantly fall in love with Genii’s Reef Encounter slot game!

As mentioned, if you are a fan of the hit Disney Pixar film “Finding Nemo”, you will instantly love this Reef Encounter slot game.

This is because it is rather clear that Genii has taken inspiration from the film, with a clownfish that looks identical to Nemo available throughout this game.

The background of this title makes players feel as though they are deep under the ocean’s surface level, as they can see the seabed whilst also being able to view a piece of coral.

Genii has kept this game simple to play and enjoy, as they have utilised a traditional playing grid consisting of 5 reels and 3 rows, whilst keeping it transparent, thus adding to the visual experience offered.

The game also consists of 25 adjustable paylines, meaning players can play with as many or as few as they like on each spin.

When looking at the paytable, this Reef Encounter slot game features traditional playing card values that have been decorated as if they are parts of a reef whilst also using seahorses, a starfish – perhaps Peach – and a fish that looks eerily like Dory.

Naturally, there are a host of different Reef Encounter bonus features available to trigger in this game, with players able to enjoy each of them by landing the special symbols that have been added to the reels.

The first some are likely to come across includes the clownfish that looks much like Nemo, as this is the game’s wild icon. It can substitute for all regular paytable icons and help complete any possible winning combinations when it lands on an active payline.

The next Reef Encounter bonus feature is the special scatter icon that has been included. Some would identify it as Crush, whilst the game has mentioned it just as a turtle. Players who land this symbol multiple times on a single spin will be able to win a prize of a greater value compared to other icons on the board.

The final Reef Encounter bonus feature that can be triggered is the free spins game, which is possible via the pink octopus icon. Players must land at least 3 of these icons to activate the bonus.

Those who land the bare minimum will win 10 free spins, although those who land more octopus icons will be rewarded justly. Some 15 or 20 free spins can be won by those who manage to land 4 or 5 of these creatures, respectively.

If the free spins were not enough, this Reef Encounter bonus feature will also see every win triggered be doubled in value!

The return to player (RTP) rate for this game is believed to be around 90%, but Genii has not publicly made that information available.

The game can be played for a minimum bet of $/€/£0.01 when everything has been set to its minimum level, whilst a maximum bet of $/€/£25 is also possible to place on each spin.

Clearly, “Finding Nemo” has been the main source of inspiration for this Reef Encounter slot game; therefore, lovers of the film will instantly find themselves enjoying this title.

However, those that are not fans will still find that they will enjoy this Genii title, as players will be able to benefit from some rather top bonus features, including the brilliant free spins game!

If you like the Reef Encounter slot game, why not try Ocean’s Treasure or Aladdin’s Legacy for another themed-style game?